Botulinum Toxin Type A Injections in a Woman with Uncontrolled Drooling and Hypersalivation from Tardive Dyskinesia: A Case Report 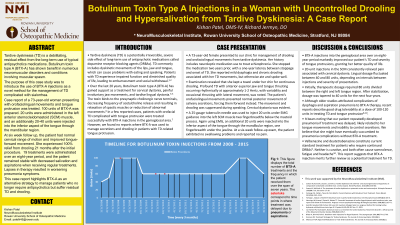 Case Description: A 74-year-old female presented for management of drooling and orofaciolingual movements. Her history included dementia and TD from long-term neuroleptic medication use to treat schizophrenia. She stopped the medication two years prior. She reported mild dysphagia and chronic drooling associated with her TD-type movements, but otherwise eats and speaks well. Examination showed profound TD with anterior-superior jaw and tongue thrusting occurring rhythmically at approximately 1-2 Hertz, with variability and occasional thrusting with lateral movement. The movement and drooling was suppressed during speaking. The patient’s orofaciolingual movements prevented normal posterior movement of salivary secretions, forcing them forward instead. Injections of BTX-A to the tongue and cervical region to mitigate dystonia and reduce drooling were recommended. 20 units of BTX-A were administered in the left anterior sternocleidomastoid muscle, and an additional 40 units were injected into the inferior aspect of the tongue through the mandibular region. Patient had no following complications.

Discussions: BTX-A injections into the genioglossal area over an eight-year period markedly improved our patient’s TD and severity of tongue protrusions, granting her better quality of life. 100% relief from drooling was achieved at 21 months following the initial procedure. While few cases report orofacial TD complicated with tongue protrusion is treated successfully with BTX-A injections, we found no reports where BTX-A was used to manage secretions and drooling in this patient population. Our patient repeatedly developed pneumonia if treatment was delayed. We believe that she might have eventually succumbed to pneumonia complications without BTX-A treatment.

Conclusions: This report highlights BTX-A as an alternative strategy to manage patients who no longer require antipsychotics but suffer residual TD complicated with sialorrhea.