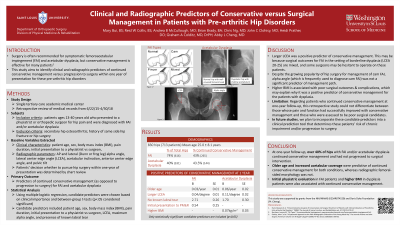 Objectives: Surgery is often recommended for symptomatic femoroacetabular impingement (FAI) and acetabular dysplasia, but conservative management is effective for many patients. This study identified clinical and radiographic predictors of continued conservative management versus progression to surgery within one year of presentation for these pre-arthritic hip disorders.