Catheter Tip Granuloma as a Unique Cause Of Myelopathy 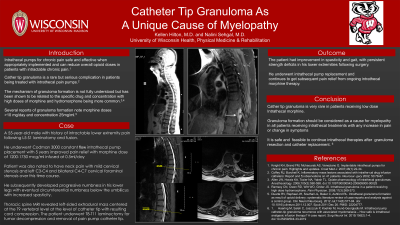 Case Description: This is a 55-year-old male with history of intractable lower extremity pain following L5-S1 laminotomy and fusion. He had intrathecal pump placed with 5 years improved pain relief with morphine dose less than 1mg/day. He subsequently developed progressive numbness in his lower legs with eventual circumferential numbness below the umbilicus with increased spasticity. Thoracic spine MRI revealed left-sided extradural mass centered at the T9 vertebral level at the level of catheter tip with resulting cord compression. The patient underwent T8-T11 laminectomy for tumor decompression and removal of pain pump catheter tip. The patient had improvement in spasticity and gait, with persistent strength deficits in his lower extremities. He had subsequent intrathecal pump replacement and continues to get pain relief from ongoing intrathecal morphine therapy.

Conclusions: The mechanism of catheter tip granuloma formation is not well understood and although incidence is higher among those receiving increased medication concentration, it remains a possibility in patients receiving much lower doses. It is important to consider catheter tip granuloma as a potential cause of myelopathy in any patient receiving intrathecal treatments. Increased suspicion may lead to earlier detection and possible improved following surgical intervention. Early detection may be increased with recognition of increasing pain symptoms, and close monitoring myelopathy symptoms. It is feasible to continue intrathecal therapy after initial granuloma formation and catheter removal. There is no demonstrated increase in rate of recurrence in this population.