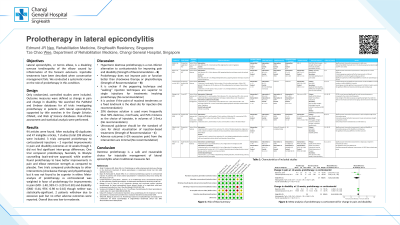 Objectives: Lateral epicondylitis, or tennis elbow, is a disabling overuse tendinopathy of the elbow caused by inflammation of the forearm extensors. Injectable treatments have been described when conservative management fails. We conducted a systematic review on the role of prolotherapy in this condition.

Design: We searched the PubMed and Embase databases for all randomized controlled trials that investigated prolotherapy in patients with lateral epicondylitis, supported by title searches in Google Scholar as well as the CINAHL and Web of Science databases. The outcome measures were defined as change in pain and change in disability. Articles were selected according to the PRISMA recommendations and evaluated according to the Cochrane risk of bias tool.