Radiofrequency Ablation and Chronic Thoracic Pain: An Evidence Based Review 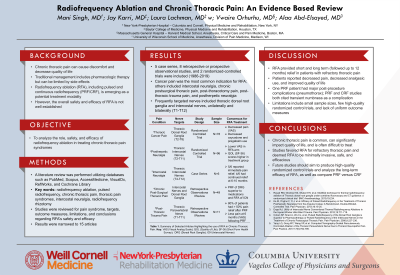 Objectives: Chronic thoracic pain can cause discomfort and decrease quality of life. Traditional management includes pharmacologic therapy but can be limited by side effects. Radiofrequency ablation (RFA), including pulsed and continuous radiofrequency (PRF/CRF), is emerging as a treatment tool. However, the overall safety and efficacy of RFA is not well established. The objective of this study is to analyze the role, safety, and efficacy of RFA in treating chronic thoracic pain syndromes.