Recurrence of Parsonage-Turner Syndrome (PTS) in the Contralateral limb 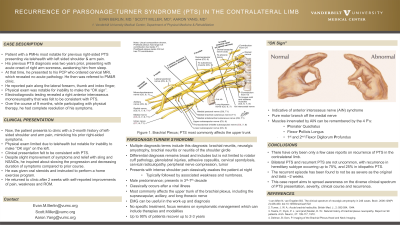 Case Description: 32-year-old male with previous right sided PTS presenting via telehealth with left sided shoulder & arm pain. Two years prior, he presented with acute onset of right arm soreness awakening him from sleep. He presented to his PCP who ordered cervical MRI which revealed no acute pathology. With persistent symptoms, he was referred to PM&R clinic. He reported pain along the lateral forearm, thumb and index finger. Physical exam was notable for inability to make the “OK sign”. Electrodiagnostic testing revealed right anterior interosseous mononeuropathy, felt to be consistent with PTS. Over the course of 9 months, while participating with physical therapy, he had complete resolution of his symptoms. Now the patient presents to clinic with a 2-month history of left sided shoulder and arm pain, mimicking his prior right sided symptoms. This was felt consistent with PTS.

Discussions: Upon presentation, despite slight improvement of symptoms and relief with sling and NSAIDs, he inquired about slowing the progression and decreasing duration of symptoms compared to prior course. He was given oral steroids and instructed to perform a home exercise program. He returned to clinic after 2 weeks with self-reported improvements of pain, weakness and ROM. Given his resolving symptoms and prior history, EMG and further imaging were not indicated, and the patient was instructed to follow up as needed.

Conclusions: After significant literature review, there have only been only a few case reports on recurrence of PTS in the contralateral limb. Bilateral PTS and recurrent PTS are not uncommon, with recurrence in hereditary subtype occurring up to 75%, and 25% in idiopathic PTS. Recurrent episodes have not been found to be as severe as the original and lasts ~2 weeks. This case report aims to spread awareness on the diverse clinical spectrum of PTS presentation, severity, clinical course and recurrence.