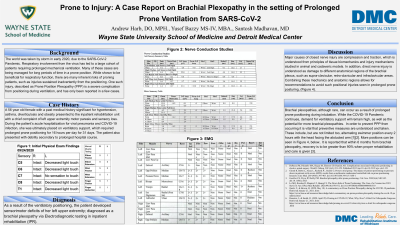 Case Diagnosis: Prone to Injury: Brachial Plexopathy in the Setting of Prone Ventilation from SARS-CoV-2

Case Description:  A 56-year-old female presented to the inpatient rehabilitation unit with a chief complaint of left upper extremity motor and sensory paralysis. During the patient’s acute hospitalization for COVID-19, she was ultimately placed on ventilatory support, which required prolonged prone positioning for 31 days. As a result of the ventilatory positioning, the patient developed sensory and motor deficits, which was later diagnosed as a brachial plexopathy via Electrodiagnostic testing in inpatient rehabilitation (IPR). With adequate therapy, the patient’s deficits improved significantly. During her stay in IPR, she regained both motor and sensory functions.

Discussions: The COVID-19 pandemic was led to a large cohort of patients requiring prolonged mechanical ventilation. And many of these cases are being managed for long periods of time in a prone position. While shown to be beneficial for respiratory function, there are many inherent risks of proning patients, like injuries sustained inadvertently from the positioning. One such injury, described as Prone Position Plexopathy (PPP) is a severe complication of prone positioning during ventilation and has only been reported in a few cases. In this case report, we describe a COVID-19 patient who presented to IPR with severe sensorimotor mononeuropathy after prolonged prone positioning on mechanical ventilation in the ICU.

Conclusions: Brachial plexopathies, although rare, can occur as a result of prolonged prone positioning during intubation. While the COVID-19 Pandemic continues, demand for ventilatory support will remain high, as well as the potential for more brachial plexopathies. In order to prevent PPP from occurring it is vital that measures are understood and taken. This case report will identify some preventative measures that may assist in limiting injury in future cases.