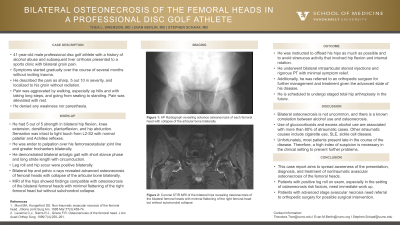 Case Description: A 41-year-old male professional disc golf athlete with a history of alcohol abuse and subsequent liver cirrhosis presented to a sports clinic with bilateral groin pain. Symptoms started gradually over the course of several months without any inciting trauma. He described the pain as sharp, 5 out 10 in severity, and localized to his groin without radiation. He stated that walking, especially up hills and with taking long steps, and going from seating to standing aggravated the pain. Rest alleviated the pain. He denied any weakness nor paresthesias.

Discussions: On exam, he had 5 out of 5 strength in bilateral hip flexion, knee extension, dorsiflexion, plantarflexion, and hip abduction. He was tender to palpation over his femoroacetabular joint line and greater trochanters bilaterally. He had bilateral antalgic gait with short stance phase and long stride length with circumduction. Leg roll and hip scour were positive bilaterally. Sensation was intact to light touch from L2-S2 with normal reflexes at the patella and Achilles. Bilateral hip and pelvic x-rays revealed advanced osteonecrosis of each femoral head with collapse of the articular bone bilaterally. MRI confirmed diagnosis.

Conclusions: The patient was told to offload his hips as much as possible and to avoid strenuous activity that involved hip flexion and internal rotation. He was referred to an orthopedic surgeon for further management and treatment given the advanced state of his disease. Bilateral osteonecrosis is not uncommon, and there is a known correlation between alcohol use and osteonecrosis. Unfortunately, most patients present late in the course of the disease and therefore a high index of suspicion is necessary in the clinical setting. This case report aims to spread awareness of the presentation, diagnosis, and treatment of nontraumatic avascular osteonecrosis of the femoral heads.