The Diagnostic Challenge of ALS during the COVID-19 Pandemic 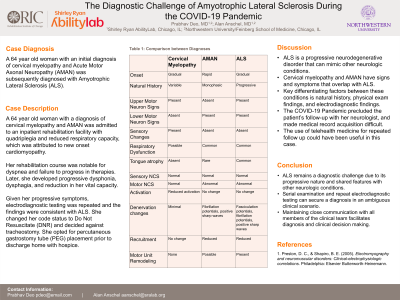 Case Diagnosis: A patient with an initial diagnosis of cervical myelopathy and Acute Motor Axonal Neuropathy (AMAN) who was diagnosed with Amyotrophic Lateral Sclerosis (ALS)

Case Description: A 64 year old female with quadriparesis attributed to cervical myelopathy and AMAN presented to an acute care hospital from a skilled nursing facility with diarrhea, shortness of breath, and worsening weakness. She received intravenous immunoglobulin (IVIG) and was diagnosed with Takotsubo Cardiomyopathy. Her symptoms were determined to be secondary to relapse of AMAN and new onset cardiomyopathy.

She presented for inpatient rehabilitation with quadriplegia and reduced respiratory capacity. Her course was notable for dyspnea and failure to progress in therapies. Later she developed progressive dysphonia, dysphagia, and reduction in her vital capacity. Given her progressive symptoms, electrodiagnostic testing was repeated and findings were consistent with ALS. She changed her code status to Do Not Resuscitate (DNR) and decided against tracheostomy. She opted for percutaneous gastrostomy tube (PEG) placement prior to discharge home with hospice.

Discussions: ALS is a progressive degenerative disorder that can initially mimic other neurologic conditions and may not become apparent until bulbar and respiratory muscles are involved. The patient was initially diagnosed with cervical myelopathy, then AMAN, and finally received the additional diagnosis of Takotsubo cardiomyopathy. Given the COVID-19 pandemic, she was unable to maintain follow up with her neurologist and obtain medical records during rehabilitation. These issues, combined with her pre-existing diagnosis contributed to delayed consideration of alternative diagnoses. AMAN and other Guillain-Barre subtypes are typically monophasic diseases with rare relapses. Her continual deterioration, notably her decreasing vital capacity, prompted repeat electrodiagnostic testing.

Conclusions: Despite defined criteria, diagnosing ALS remains a challenge due to its progressive course and commonalities with other neurologic conditions. It is important to maintain a wide differential, perform serial examinations, and maintain close communication with a team of physicians.