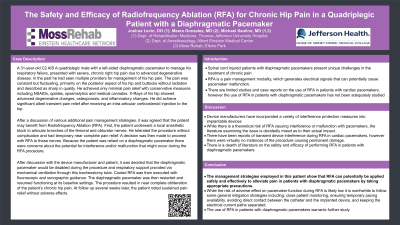 Case Diagnosis: Chronic right hip pain in a quadraplegic with a diaphragmatic pacemaker

Case Description: A 31-year-old quadriplegic male with a left-sided diaphragmatic pacemaker to manage his respiratory failure, presented with severe, chronic right hip pain due to advanced degenerative disease. He had failed conservative measures including NSAIDs, opiates, spasmolytics and medicinal marijuana. He had a positive transient response to an intra-articular corticosteroid injection. The patient underwent a local anesthetic block to articular branches of the femoral and obturator nerves with strong positive response. A decision was then made to attempt RFA to these nerves. For the procedure, the diaphragmatic pacemaker was disabled and respirator support was provided via mechanical ventilation through the tracheostomy tube. Cooled RFA was executed with fluoroscopic and sonographic guidance. The diaphragmatic pacemaker was then restarted and resumed functioning at the baseline settings. The procedure resulted in near complete obliteration of the patient’s chronic hip pain. The patient achieved sustained pain relief at follow-up without adverse effects.

Discussions: RFA generates electrical signals which may cause pacemaker malfunction.  With cardiac pacemakers, mitigation strategies include close monitoring, ensuring temporary pacing availability, avoiding direct contact between the catheter and the implanted device, and keeping the electrical current paths separated. There is a dearth of case reports on the safety of performing RFA in patients with diaphragmatic pacemakers.

Conclusions: The management strategies employed in this patient shows that RFA can potentially be applied safely and effectively to alleviate pain in patients with diaphragmatic pacemakers by taking appropriate precautions.