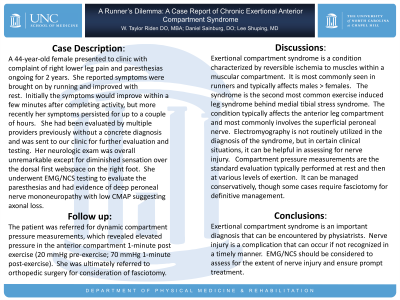 Case Description: A 44-year-old female presented to clinic with complaint of right lower leg pain and paresthesias ongoing for 2 years.  She reported symptoms were brought on by running and improved with rest.  Initially the symptoms would improve within a few minutes after completing activity, but more recently her symptoms persisted for up to a couple of hours.   She had been evaluated by multiple providers previously without a concrete diagnosis and was sent to our clinic for further evaluation and testing.  Her neurologic exam was overall unremarkable except for diminished sensation over the dorsal first webspace on the right foot.  She underwent EMG/NCS testing to evaluate the paresthesias and had evidence of deep peroneal nerve mononeuropathy with low CMAP suggesting axonal loss.

Discussions: Exertional compartment syndrome is a condition characterized by reversible ischemia to muscles within a muscular compartment.  It is most commonly seen in runners and typically affects males > females.   The syndrome is the second most common exercise induced leg syndrome behind medial tibial stress syndrome.  The condition typically affects the anterior leg compartment and most commonly involves the superficial peroneal nerve.  Electromyography is not routinely utilized in the diagnosis of the syndrome, but in certain clinical situations, it can be helpful in assessing for nerve injury.   Compartment pressure measurements are the standard evaluation typically performed at rest and then at various levels of exertion.  It can be managed conservatively, though some cases require fasciotomy for definitive management.

Conclusions: Exertional compartment syndrome is an important diagnosis that can be encountered by physiatrists.  Nerve injury is a complication that can occur if not recognized in a timely manner.  EMG/NCS should be considered to assess for the extent of nerve injury and ensure prompt treatment.