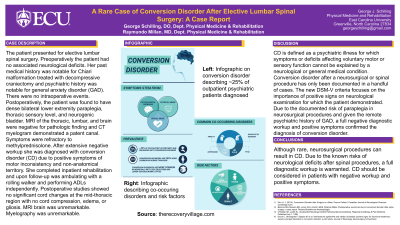 Case Description: The patient presented for elective lumbar spinal surgery. Preoperatively the patient had no associated neurological deficits. Her past medical history was notable for Chiari malformation treated with decompressive craniectomy and psychiatric history was notable for general anxiety disorder (GAD). There were no intraoperative events. Postoperatively, the patient was found to have dense bilateral lower extremity paraplegia, thoracic sensory level, and neurogenic bladder. MRI of the thoracic, lumbar, and brain were negative for pathologic finding and CT myelogram demonstrated a patent canal. Symptoms were refractory to methylprednisolone. After extensive negative workup, she was diagnosed with conversion disorder (CD) due to positive symptoms of motor inconsistency and non-anatomical territory. She completed inpatient rehabilitation and upon follow-up was ambulating with a rolling walker and performing ADLs independently. Postoperative studies showed no significant cord changes at the mid-thoracic region with no cord compression, edema, or gliosis. MRI brain was unremarkable. Myelography was unremarkable.

Discussions: CD is defined as a psychiatric illness for which symptoms or deficits affecting voluntary motor or sensory function cannot be explained by a neurological or general medical condition. Conversion disorder after a neurosurgical or spinal procedure has only been documented in a handful of cases. The new DSM-V criteria focuses on the importance of positive signs on neurological examination for which the patient demonstrated. Due to the documented risk of paraplegia in neurosurgical procedures and given the remote psychiatric history of GAD, a full negative diagnostic workup and positive symptoms confirmed the diagnosis of conversion disorder.

Conclusions: Although rare, neurosurgical procedures can result in CD. Due to the known risks of neurological deficits after spinal procedures, a full diagnostic workup is warranted. CD should be considered in patients with negative workup and positive symptoms.