A Controversial Dose of Radiotherapy after Bilateral Girdlestone Procedures 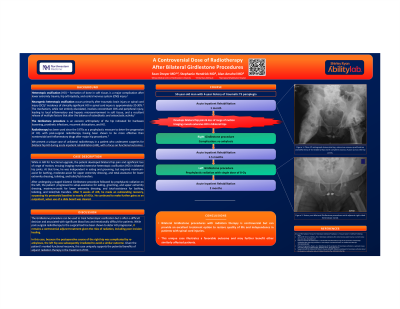 Case Diagnosis: A 50-year-old man with a 4-year history of traumatic T5 paraplegia

Discussions: The Girdlestone procedure can be used to treat heterotopic ossification but is often a difficult decision and associated with significant blood loss. While post-surgical radiotherapy to the surgical bed may deter HO progression, it remains controversial given the risks of radiation, including poor incision healing. However, given the postoperative course of the right hip was complicated by re-ankyloses, the left hip was subsequently irradiated to avoid a similar outcome. Given the patient’s marked functional recovery, this case uniquely supports the potential benefits of adjunct radiation therapy in the treatment of HO.

Conclusions: Undergoing Girdlestone procedures with radiation therapy is controversial but can provide an excellent treatment option to restore quality of life and independence. Given the high prevalence of HO after a spinal cord injury, such a case with a favorable outcome may further benefit other similarly affected patients.