PDC is a class C β-lactamase in P. aeruginosa. PDC-88 is a variant characterized by a Thr-Pro amino acid deletion in the R2-loop (Δ289-290; Fig. 1). This deletion reduces susceptibility to cefepime (FEP), ceftazidime (CAZ), and ceftolozane-tazobactam (TOL/TZB), but the mechanism for this “gain of function” is unknown. Taniborbactam (TAN) is a novel cyclic boronate β-lactamase inhibitor (BLI) with activity against all four β-lactamase classes and is currently undergoing a phase 3 clinical trial paired with FEP. Herein, we studied the extended-spectrum AmpC (ESAC) phenotype of PDC-88 and examined the ability of TAN to inhibit this variant.Figure 1 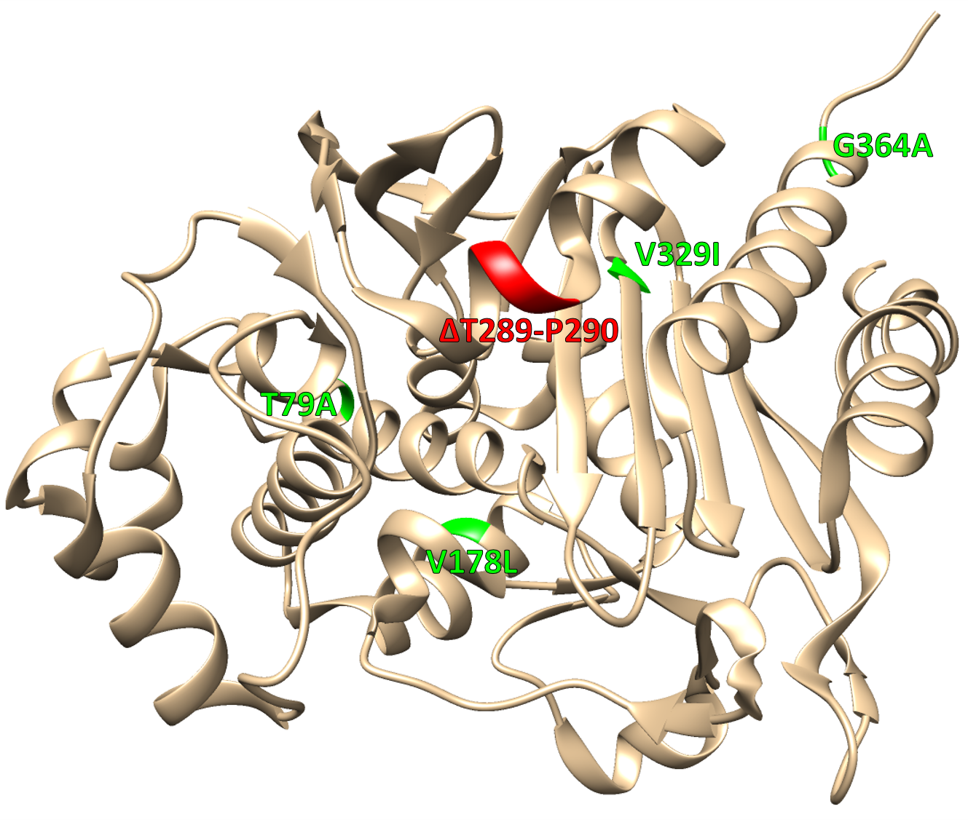 Structure of PDC-1 (PDB ID: 4GZB) with PDC-88 deleted residues in red and substitutions in green. All four amino acid substitutions (T79A, V178L, V329I, and G346A) are common (occurring in 10% or more of PDC variants) and have not been associated with resistance. Image rendered using UCSF Chimera.

Cefepime Minimum Inhibitory Concentration (MIC) for PDC-1 and a series of partial R2-loop deletions with and without taniborbactam, avibactam, and tazobactam. In all variants, taniborbactam and avibactam restored susceptiblity while tazobactam is less effective against PDC-88 and variants.
Table 2

Conclusion: Different kinetic constants are responsible for the elevated cephalosporin MICs.  We posit that PDC-88 increases FEP MIC by enhanced hydrolysis; TOL MICs by enabling acylation; and CAZ MICs by both trapping and enhanced hydrolysis. TAN inhibits both PDC-3 and PDC-88 with similar kinetic profiles. Notably, TAN appears to be a more efficient inhibitor of PDC than current BLIs targeted for use against P. aeruginosa (lower Ki, higher k2/K values). The combination of TAN and FEP may represent an important treatment option for P. aeruginosa isolates that develop ESAC phenotypes.