534 - The Use of Tocilizumab and Remdesivir in SARS- CoV-2 Patients in El Paso Texas: A longitudinal Comparative Observational Study

Background: Currently, the management of SARS-CoV-2 varies with no definitive clinical guidelines, as scientific evidence across the globe differs in therapeutic options. This study intends to provide some clarity to the insufficient data based on the role of monotherapy with tocilizumab (TCZ) and combination therapy with remdesivir (RDV) and TCZ among patients in El Paso, Texas.

154 SARS-CoV-2-positive patients from four different hospitals in El Paso, Texas, were screened, with 113 eligible for this longitudinal comparative observational study (2/1/2020-10/31/2020). Group 1 (80 patients) were given TCZ within the first 24 hours of hospitalization, followed by methylprednisolone for 72 hours, and Group 2 (33 patients) received TCZ as detailed in the single therapy group, plus RDV within the first 24 hours. Mann Whitney U test assessed Median differences in laboratory biomarkers and Bivariate Logistic Regression assessed the odds of risk. An observation is said to be statistically significant if P-value is ≤ 0.05. 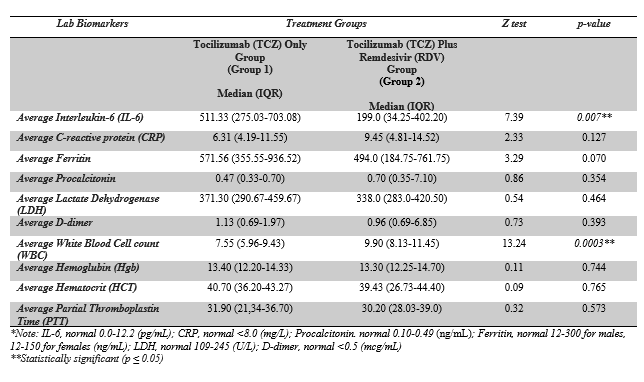 This study population is unique as it reflects a predominantly Hispanic demographic population in El Paso with different genetics, background characteristics, and predisposition to diabetes, and obesity than the rest of the United States (US). We concluded that the use of TCZ in SARS-CoV-2 positive patients in El Paso, with or without RDV, reported no mortality benefit. However, some minimal/non-use of ventilation benefit was observed in Group 1. Our study design is considered the first of its kind using TCZ and RDV in a longitudinal comparative observational study. Nonetheless, a randomized controlled trial study is recommended to ultimately determine the combination role of TCZ and RDV among this highly vulnerable group of patients.