K. Tuberculosis and other Mycobacterial Infections

Novel therapies for multidrug-resistant TB are needed and new BLIs could answer this call. Mtb encodes for BlaC, a class A β-lactamase. BlaC is inhibited by clavulanate (CLA) while the DBO avibactam (AVI) is an inefficient inhibitor (low k2/K value). Carbapenems are hydrolyzed slowly by BlaC (low k­cat/Km value) making them “dual action” compounds that inhibit both BlaC and PG transpeptidases, the intended β-lactam targets. DBOs inhibit PG transpeptidases in other bacteria. To explore the therapeutic potential of new DBOs against Mtb, we compared the inhibitor activity of AVI, relebactam (REL), and durlobactam (DUR, formerly ETX2514) against BlaC and Mtb PG transpeptidases using a biochemical approach. We also investigated the ability of DUR to lower minimum inhibitory concentrations (MICs) of β-lactams against Mtb H37Rv.

Results: DUR alone had a MIC of 2 µg/mL with Mtb H37Rv (Table 1). BlaC formed AECs with all carbapenems and BLIs. BlaC had lower Ki app and higher k2/K with DUR than those with AVI and REL and comparable to those with CLA; however, with a period of pre-incubation, AVI fully inhibits BlaC (Table 2). The carbapenems and DUR formed the most AECs with PG transpeptidases of the β-lactams and BLIs respectively; PG transpeptidases had lower Ki app values with DUR than those with AVI (Table 3). Table 1. Minimum Inhibitory Concetrations for Mycobacterium tuberculosis H37Rv 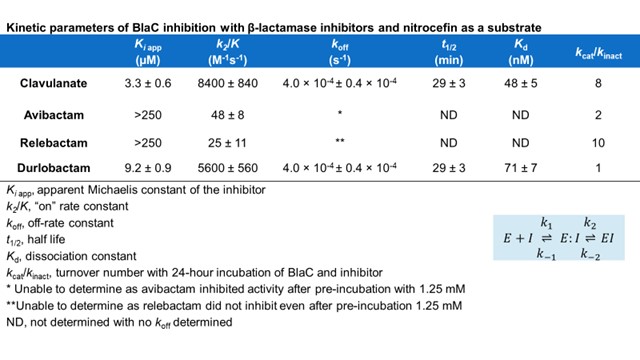 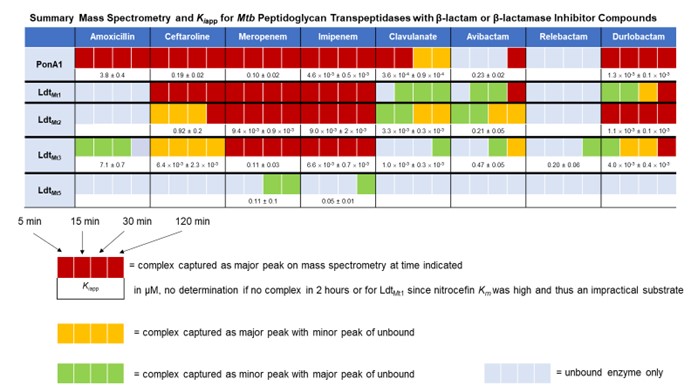 : DUR alone has some antimicrobial activity against Mtb H37Rv. The likely mechanism that underlies this activity is inhibition of BlaC and several PG transpeptidases. Inhibition of enzyme targets with DUR was more potent and efficient than AVI and REL. DUR in combination with β-lactams lowered MICs but the DUR concentration used was higher than its MIC. Our findings support the exploration of novel BLIs against BlaC and PG transpeptidases with the ultimate goal of repurposing these drugs for the treatment of TB.