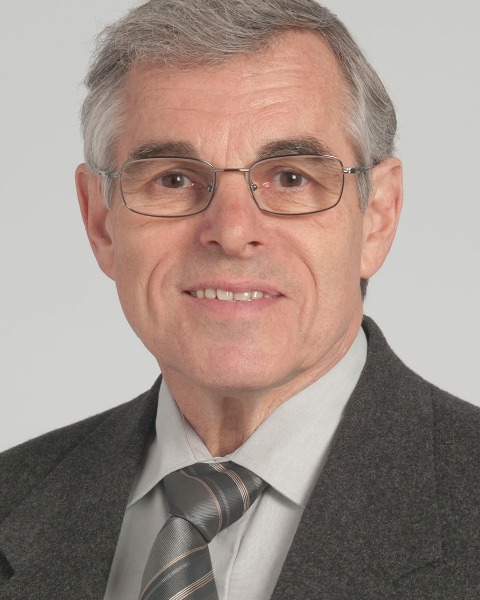 Dr. Gary Hoffman received his medical degree from the Medical College of Virginia and pursued advanced training in medicine and rheumatology at the Dartmouth Medical School-Mary Hitchcock Clinic. In 1987, he joined Dr. Anthony Fauci’s Vasculitis and Related Diseases Section at the National Institutes of Health (NIH) from 1987 to 1992. He became the head of that section and his career has since focused on vasculitis care and research.
In 1992 he became the Chairman of the Department of Rheumatic and Immunologic Diseases at the Cleveland Clinic, where he held the Harold C. Schott Endowed Chair. He is the Founder of the Cleveland Clinic Center for Vasculitis Care and Research, Founder and past Chairman of the International Network for the Study of the Systemic Vasculitides (INSSYS) and Professor Emeritus of Medicine at the CC Lerner College of Medicine. He has led investigations of new therapies for vasculitis and coordinated INSSYS based multi-center studies of diagnostic laboratory and imaging tools to assess vasculitis disease activity.
Dr. Hoffman has authored over 350 articles and chapters and edited 4 books. Awards include the NIH Director's Award, the NIAID Director's Award, Ohio Association of Rheumatology Lifetime Achievement Award, as well as numerous awards for research and teaching. He is a former American College of Rheumatology Board member, and was named an ACR Distinguished Clinical Investigator.