(L5145) LRP1 is a master regulator of tau uptake and spread

The spread of protein aggregates during disease progression is a common theme underlying many neurodegenerative diseases. The microtubule-associated protein tau (MAPT) plays a central role in the pathogenesis of several forms of dementia known as tauopathies, including Alzheimer’s disease (AD), frontotemporal dementia (FTD) and chronic traumatic encephalopathy (CTE)1. Progression of these diseases is characterized by the sequential spread and deposition of protein aggregates in a predictable pattern that correlates with clinical severity2. This observation and complementary experimental studies3,4 have suggested that tau can spread in a prion-like manner by passing to naïve cells where it templates misfolding and aggregation. However, while tau propagation has been extensively studied, the underlying cellular mechanisms remain poorly understood. Here we show that the low-density lipoprotein (LDL) receptor-related protein 1 (LRP1) controls tau endocytosis and subsequent spread. Knockdown of LRP1 significantly reduced tau uptake in H4 neuroglioma cells and iPS-derived neurons. The interaction between tau and LRP1 is mediated by lysine residues in the microtubule binding repeat region of tau. Furthermore, we find that downregulation of LRP1 in an in vivo mouse model of tau spread effectively reduced tau propagation between neurons. Our results identify LRP1 as a key regulator of tau spread in the brain and, thus, as a novel target for diseases of tau spread and aggregation. 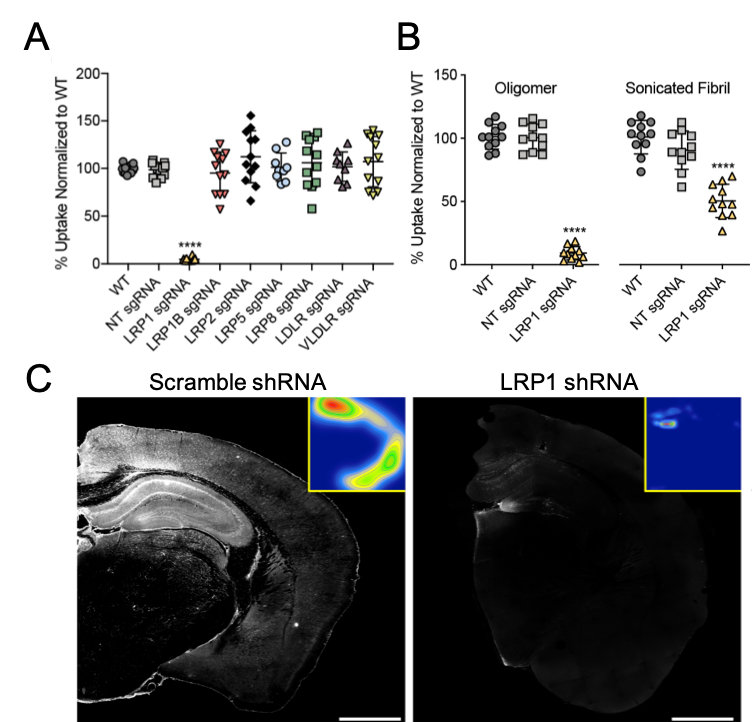