Aldehyde dehydrogenases are versatile enzymes that serve a range of biochemical functions. Although traditionally considered metabolic housekeeping enzymes because of their ability to detoxify reactive aldehydes, like those generated from lipid peroxidation damage, the contributions of these enzymes to other biological processes are widespread. For example, the plant pathogen Pseudomonas syringae strain PtoDC3000 uses an indole-3-acetaldehyde dehydrogenase to synthesize the phytohormone indole-3-acetic acid to elude host responses. Here we investigate the biochemical function of AldC from PtoDC3000. Analysis of the substrate profile of AldC suggests that this enzyme functions as a long-chain aliphatic aldehyde dehydrogenase. The 2.5 Å resolution X-ray crystal of the AldC C291A mutant in a dead-end complex with octanal and NAD+ reveals an apolar binding site primed for aliphatic aldehyde substrate recognition. Functional characterization of site-directed mutants targeting the substrate- and NAD(H)-binding sites identifies key residues in the active site for ligand interactions, including those in the “aromatic box” that define the aldehyde-binding site. Overall, this study provides molecular insight for understanding the evolution of the prokaryotic aldehyde dehydrogenase superfamily and their diversity of function. 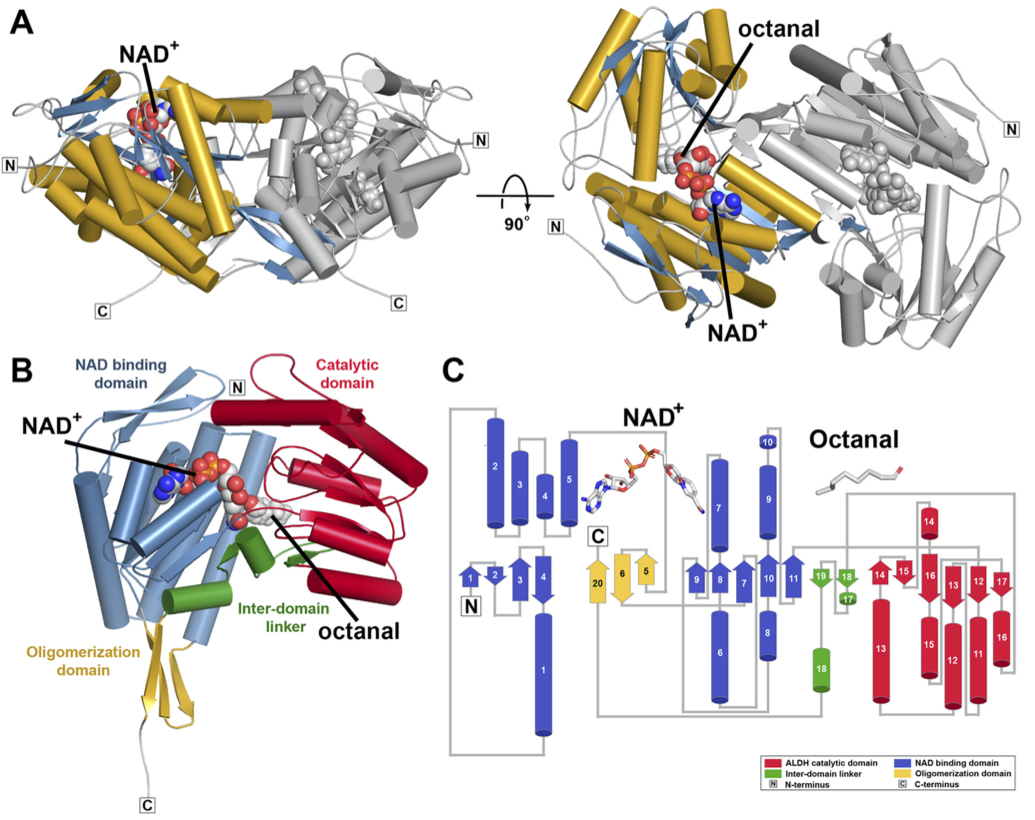 Overall structure of the AldC C291A mutant structure. (A) The dimeric structure of AldC dimer is shown as a ribbon diagram. Ligands are shown as space-filling models. (B) Domain organization of the AldC monomer. The color scheme for the AldC monomer shows the NAD(H)-binding domains in blue, the catalytic domain in red, the interdomain linker in green, and the oligomerization domain in gold. (C) Topology of AldC.