Amyotrophic Lateral Sclerosis (ALS; Lou Gehrig’s disease) is one of the leading progressive neurological disorders and has yet to be fully understood. The inability of upper and lower motor neurons to receive and pass signals from the brain, spinal cord and muscles leads to debilitation and eventually death. Several factors contribute to the development of ALS, a common factor includes cytoplasmic aggregation of post translationally modified inclusions of TAR DNA binding protein, TDP-43. This protein is normally found in the nucleus, targets RNA transcripts, and regulates RNA stability and processing pathways.

The C terminal domain of TDP-43 is responsible for self-regulation, formation of stress granules, as well as maintaining proper structure to permit interactions with nucleic acids and proteins. An accumulation of C terminal fragments (CTF), specifically CTF-25 and CTF-35, accumulate in the cytoplasm of neuronal cells in individuals with ALS. This computational study was designed to investigate the structural impact of three-point mutations identified in TDP-43 (G298A, K263E and A321D) using molecular dynamic simulations. The simulated structure for each variant suggests significant structure changes that would impact several essential functions including the deletion or improper function of the nuclear localization signal, malformation of specific domains affecting interaction with RNA binding, self-regulation of the protein, and  improper function of the C terminal domain. The K263E simulated structure demonstrated the most instability of the nuclear localization signal, the RRM2 domain affecting interaction with RNA binding and self-regulation of the protein. The G298S and A321D simulated structures impacted the stability of the C terminal domain and nuclear localization signal and may therefore impact nuclear translocation.

Each variant caused significant changes in the structure exposing regions which may disrupt signaling interactions, inability to self-regulate and make vulnerable to posttranslational modifications. The accumulation of TDP-43 aggregates in the cytoplasm may contribute to the loss of nuclear TDP function, thereby resulting in the disruption of downstream cellular processes associated with the symptoms unique to ALS. 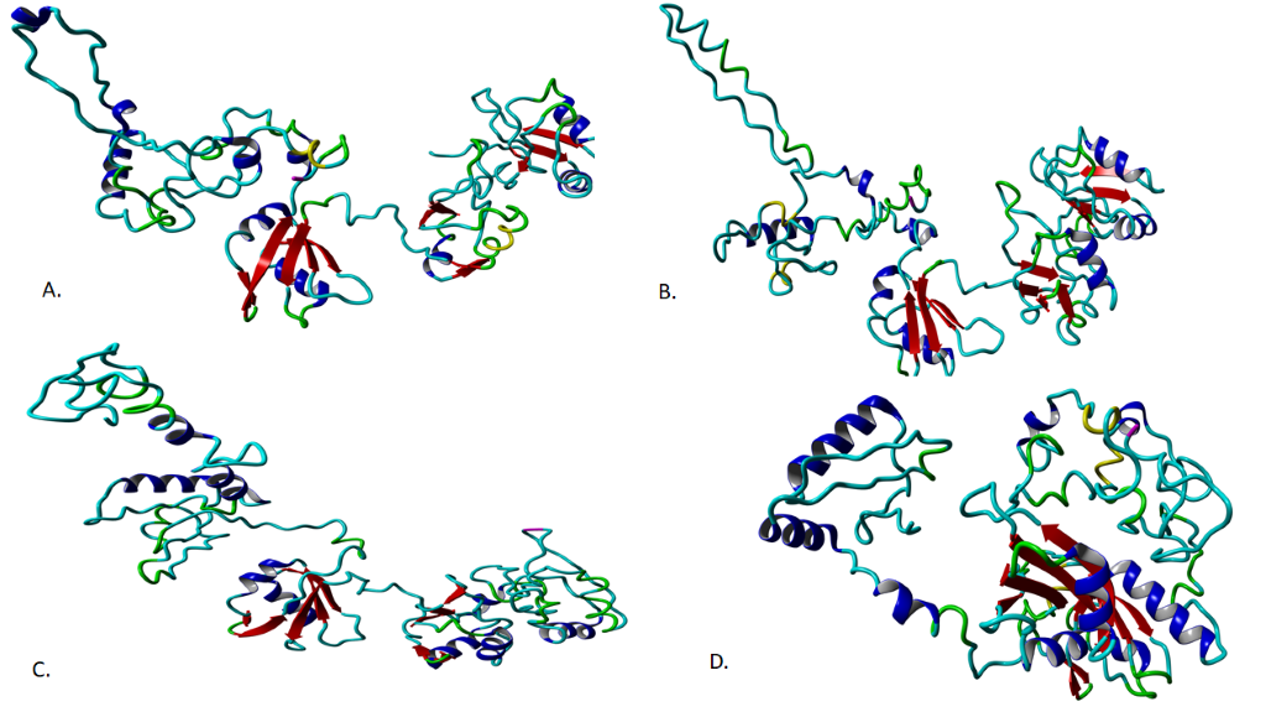 A comparison of wildtype TDP43 with three variants
MDS results demonstrating energy differences between each variant and TDP-43 wildtype. Insight to instability due to variants.