The epithelial sodium channel (ENaC) located in the distal region of the nephron regulates body sodium homeostasis. It exhibits proteolytic posttranslational processing which leads to the removal of inhibitory peptide tracts and subsequent alterations in channel gating. Maximum channel activation and open probability occur at the proteolytic removal of the inhibitory tracts by serine proteases. Nephrotic Syndrome is thought to involve ENaC activation by full proteolysis of the gamma subunit and the detection of the expression of fully cleaved γ-ENaC has been elusive in vivo.

Three-month-old wild-type 129S1/SvImJ mice of both sexes were used for the experiment. Experimental nephrotic syndrome was induced by the use of doxorubicin. The mice were euthanized on days 4 and 8 and their kidneys were collected. Western blot analysis for γ-ENaC was performed with 20 µg of kidney lysate per lane. Samples were deglycosylated using Peptide:N-glycosidase F (PNGaseF). Subsequently, 20 µg of sample was loaded on an 8% polyacrylamide gel for electrophoresis. After transfer to nitrocellulose membranes, the blocked blots were incubated with the primary antibody against the γ-ENaC subunit overnight at 4°C in a 1:1000 dilution. γ-ENaC subunit was detected with a fluorescent secondary antibody labelled with IRDye 800CW. For loading control, total protein was measured using Revert Total Protein Stain. Anti-γ-ENaC was raised in rabbits against the C-terminal amino acids 634–655 of γ-ENaC (SPC-405, Stressmaq).

Western blot analysis from murine kidney cortex samples for γ-ENaC revealed a band at 74 kDa and below this a blurry signal which extended until 64 kDa. Deglycosylation of the same samples using PNGaseF led to characteristic shifts of the migration pattern of γ-ENaC subunit. The most significant change was obtained where the migration pattern changed with three separate bands arising at 74, 60 and 53 kDa. The molecular mass of the obtained bands approximated the expected mass calculated from the amino acid sequence suggesting that these bands at 74, 60 and 53 kDa represent full length, furin-cleaved and fully cleaved γ-ENaC, respectively. Kidneys from nephrotic mice displayed increased expression of fully cleaved γ-ENaC in samples collected at day 8 after induction of nephrotic syndrome. Treatment of nephrotic mice with the serine protease inhibitor aprotinin normalized the expression of fully cleaved γ-ENaC. 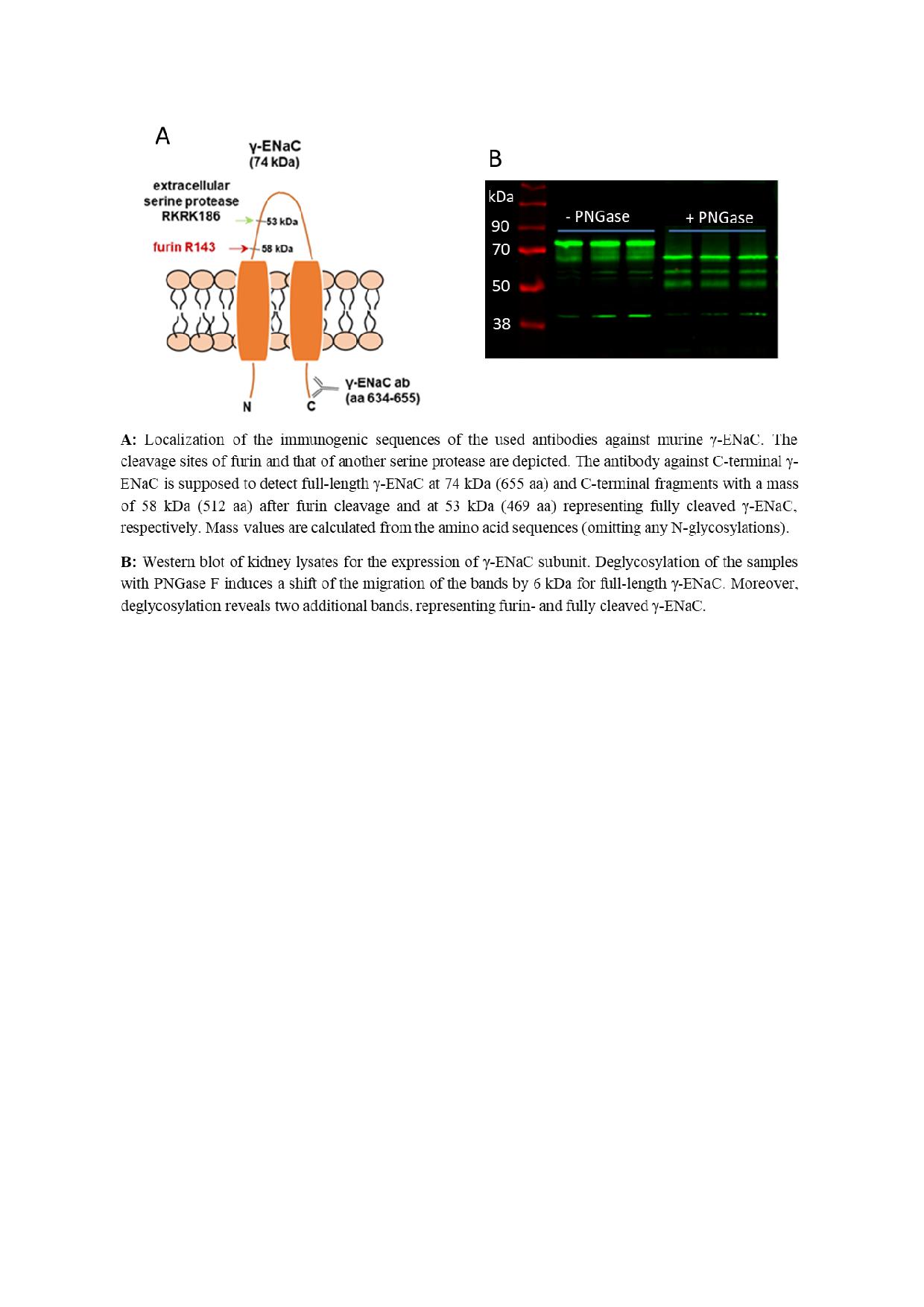