Primary open-angle glaucoma (POAG) is a major cause of irreversible blindness worldwide. The risk of POAG increases when there is an elevation in the intraocular pressure (IOP) and vertical cup-disc ratio (VCDR), which leads to the gradual loss of retinal ganglion cells (RGCs). In 2017, a single nucleotide polymorphism (SNP) rs72759609, statistically significantly linked to POAG endophenotypes, was found within a highly conserved intronic region (~900 bp) of the PDZD2 locus (Fig. 1A). PDZD2 consists of six PDZ domains, and can be proteolytically cleaved at its C-terminus to generate a secreted peptide (sPDZD2), which acts as an extracellular signaling molecule. Its expression was found in central nervous system (CNS), including sensory neurons. The fundus imaging unveiled larger optic cup (higher VCDR) in Pdzd2 heterozygous (Het) mutant mice when compared to wild-type (WT) littermate (Fig. 2A). In addition, the H&E staining of the peripheral retina also showed a reduction in RGC number in Pdzd2 Het mouse (Fig. 2B).

According to RNA in situ hybridization analysis, PDZD2 expression is in close proximity to Hedgehog (Hh)-expressing tissues, including the eye, during early development in mice. Moreover, Hh signaling is well-known for its neuroprotective role in various CNS injury models. Hh signaling, especially Sonic hedgehog (Shh) signaling, is crucial for cell differentiation during vertebrate embryonic development and is involved in the formation and functions of retinal cells.

However, the functional role of PDZD2 on retinal cells through Hh signaling during POAG development remains unclear. NT2 neuronal progenitor cells was then selected to study the relationship between PDZD2, Hh signaling and POAG. In this study, it has been hypothesized that the ~900-bp conserved region, in which rs72759609 is localized, acts as a silencer, and rs72759609 alters the PDZD2/sPDZD2 expression, which in turn gives rise to the POAG endophenotypes in both humans and mice via dysregulating the Hh signaling.

Here, deletion of the ~900-bp conserved region was shown to upregulate PDZD2 expression in NT2 cells using western blot analysis, demonstrating its role as a silencer (Fig. 1B). Interestingly, Hh signaling was also found to be upregulated after the deletion of the ~900-bp region as reflected by an increase in expression of Gli1 but a decline in Gli3 (repressor form) level in NT2 cells (Fig. 1B).

Furthermore, our preliminary results from luciferase reporter assay revealed that the alternative allele (C) of rs72759609 is associated with lower gene expression when compared against with reference allele (T). Taken together, our data suggest that PDZD2/sPDZD2 positively modulates Hh signaling in NT2 cells and that decrease in PDZD2 expression via T-to-C mutation elevates the risk of developing POAG.

Therefore, it is worthwhile to study different forms of PDZD2, especially sPDZD2, in POAG development. Later we will determine if sPDZD2 levels are downregulated in Pdzd2 Het mice by monitoring their plasma sPDZD2 levels using ELISA. The findings of this study will shed light on the understanding of POAG and lay the groundwork for identifying the diagnostic marker of POAG. 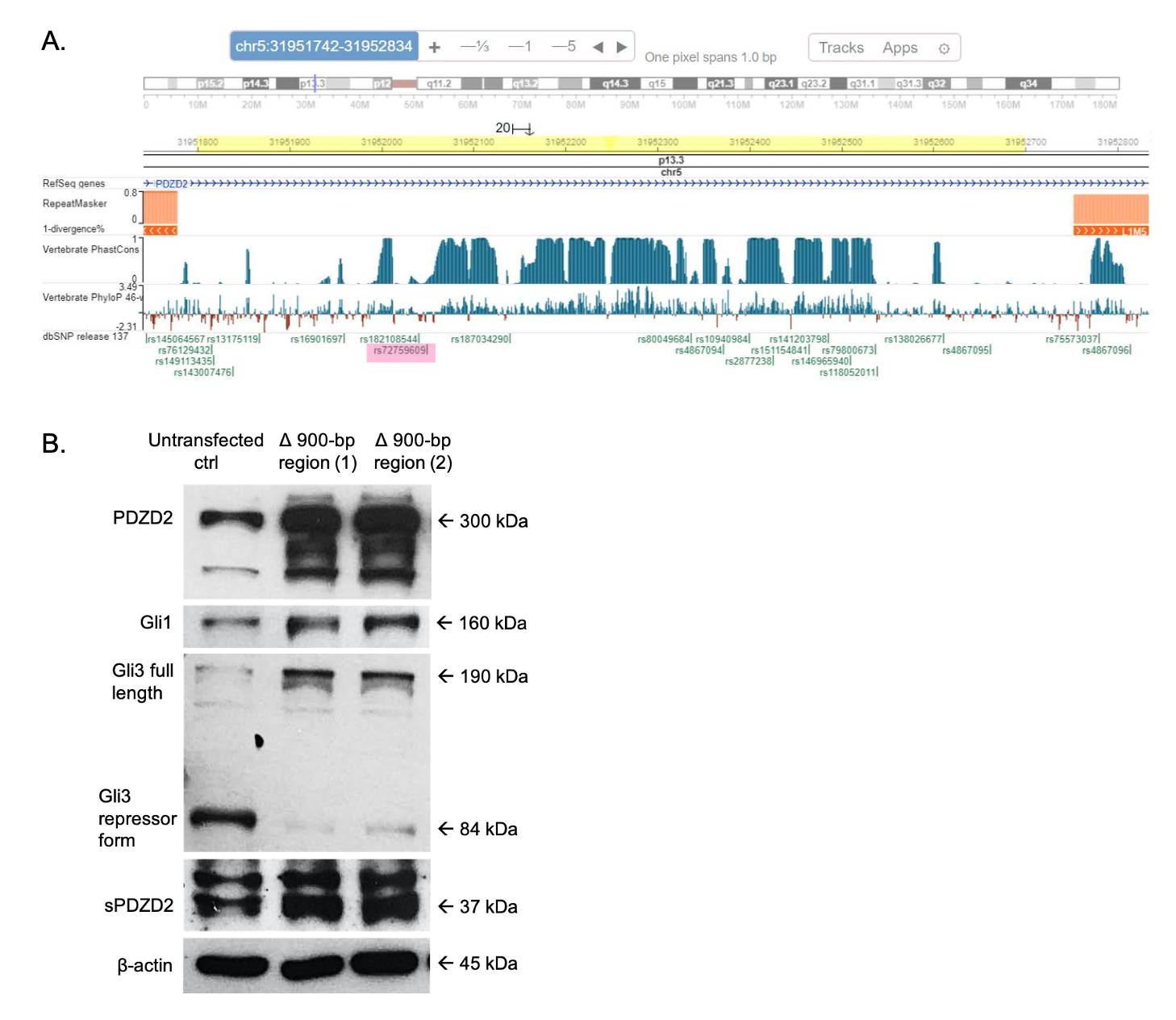 B. H&E staining demonstrated a reduced number of RGCs at the peripheral retina in 2-month-old Pdzd2 Het mouse when compared to WT littermate. Black arrow heads indicated the positions of 5 RGCs in each section, suggesting a lower density of RGCs in Pdzd2 Het mouse."