Lung cancer is the leading cause for cancer-related deaths worldwide. Research suggests that lung cancers arising in smokers show many different molecular alterations compared to those in non-smokers. While mutations contribute to lung cancer development, environmental exposures also lead to epigenetic changes –changes in the decorations and protein occupancy of the DNA—which have been shown to increase lung cancer risk. We are thus focused on studying how epigenetic changes caused by tobacco smoke exposure affect the development of lung adenocarcinoma.  Specifically, the objective is to better understand the significance of tobacco smoke-induced DNA hypomethylation near regulatory elements of the aryl hydrocarbon receptor repressor (AHRR) gene in increasing lung cancer risk. Differential DNA methylation can be an epigenetic marker of regulatory elements and is usually inversely associated with activity of these elements. It can be associated with changes in expression levels of their respective tobacco smoke responsive genes like AHRR. Previous epigenome-wide association studies have identified hypomethylation of cg05575921 upon exposure to cigarette smoke (a CpG which flanks an enhancer located in the third intron of AHRR) as predictive of lung cancer risk (1,2). Due to the importance of detoxification, it is expected that multiple enhancers may drive AHRR leading to identification of other tobacco smoke-induced hypomethylated CpGs in AHRR. From the literature I identified four smoking-induced hypomethylated CpGs on the flanks of another enhancer (as marked by histone enhancer marks H3K4me1 and H3K27ac) potentially establishing a link between cigarette smoke, this enhancer, hypomethylation, and altered levels of AHRR expression (3,4,5,6). By using a modified version of the CRISPR/Cas9 system, we are deleting this enhancer from A549 lung cancer cells to test the connection between differential DNA methylation flanking this enhancer and changes in the activity AHRR or other genes within 1 megabase. Our analyses promise to shed light on the mechanism underlying the link between hypomethylation in AHRR and lung cancer risk. 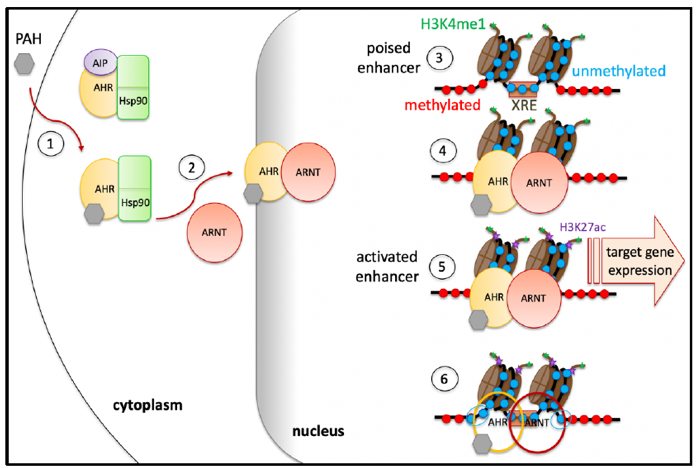 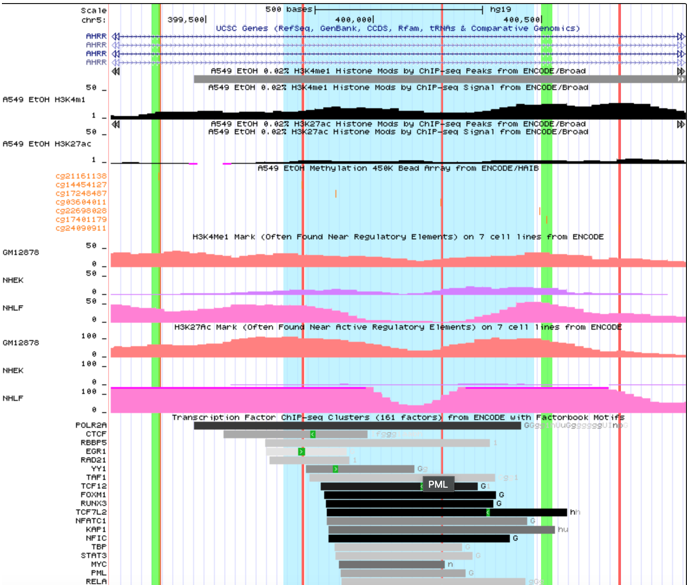 "Model for AHR, AHRR, and CpG hypomethylation at smoke-induced enhancers. Upon exposure to tobacco smoke, PAH’s bind to AHR, releasing its chaperone Hsp90 (1), before binding to ARNT, translocating inside the nucleus (2) and binding XRE such as a poised enhancer (H3K4me1 present) (3,4). This leads to enhancer activation (H2K27ac acquisition) (5) and subsequent gene expression blocking methyltransferase (6). AHRR represses AHR by competing for ARNT’s binding site.