Approximately a million people die from malaria yearly. Plasmodium falciparum, the protozoan parasite responsible, is a major target for developing specific antimalarial drugs. Plasmodium falciparum has a distinctive Malate Dehydrogenase (MDH), being tetrameric compared to the canonical dimeric forms, yet shares the same catalytic and substrate binding site motives as human mitochondrial and cytosolic forms. We identified a cryptic allosteric site on Plasmodium falciparum MDH using sequence and structural bioinformatics and identified two short sequences, (G175-L176 (subsite 1), Q211-M216 (subsite 2)) each containing highly conserved (in Plasmodium and related species) residues that are different from those in the human forms.

As a prelude to designing an allosteric ligand for this site we have investigated the impact of various mutations of each residue in the site on the pKa of the active site histidine and other titratable groups in the protein using H++ analysis. This demonstrated that 4 residues in the cryptic site contributed significantly to both the pKa of the catalytic base, H174 and other titratable groups, helping define the necessary properties of each side chain in the cryptic site that contribute to activity which could be exploited in allosteric drug design.

To investigate the dimensions and surface properties of this site we used POCASA in conjunction with electrostatics analysis to detect pockets (wheat in figure), and a SwissDock approach based on Multiple Solvent Crystal Structure (MSCS) analysis to detect potential ligand interactions with the cryptic site. Using a panel of scaffolds and side chains from the ZINC data base, together with ligands from the original MSCS approach revealed a number of potential interactions with ligands in subsite 1 & 2 of the cryptic site. Specifically, adjacent to subsite 1, 8 ligands, CYPO, CHLM, ACEE, ACTO, ETHR, ETOH, Hexane & Acetamide bound, with an additional nearby site binding Isopropanol, BENZ, BROM, ETHR & ETOH while subsite 2 showed specificity for CHLM, ACET, BIPH, DPME, BENZ & ACTO with an additional nearby site binding ETOH.

Comparative studies with human Cytosolic (green in figure) and Mitochondrial (blue in figure) isoforms indicated that neither isoform had a similar physical pocket (POCASA) and showed no significant binding specificities in the area of the cryptic site in the Plasmodium falciparum enzyme.

In conclusion, we have demonstrated the presence of a unique cryptic allosteric site on Plasmodium falciparum Malate Dehydrogenase and mapped its potential ligand interactions. The lack of a similar site on the host cytoplasmic and mitochondrial isoforms suggest this cryptic site might be suitable for rational allosteric drug design to inhibit metabolism of Plasmodium falciparum. 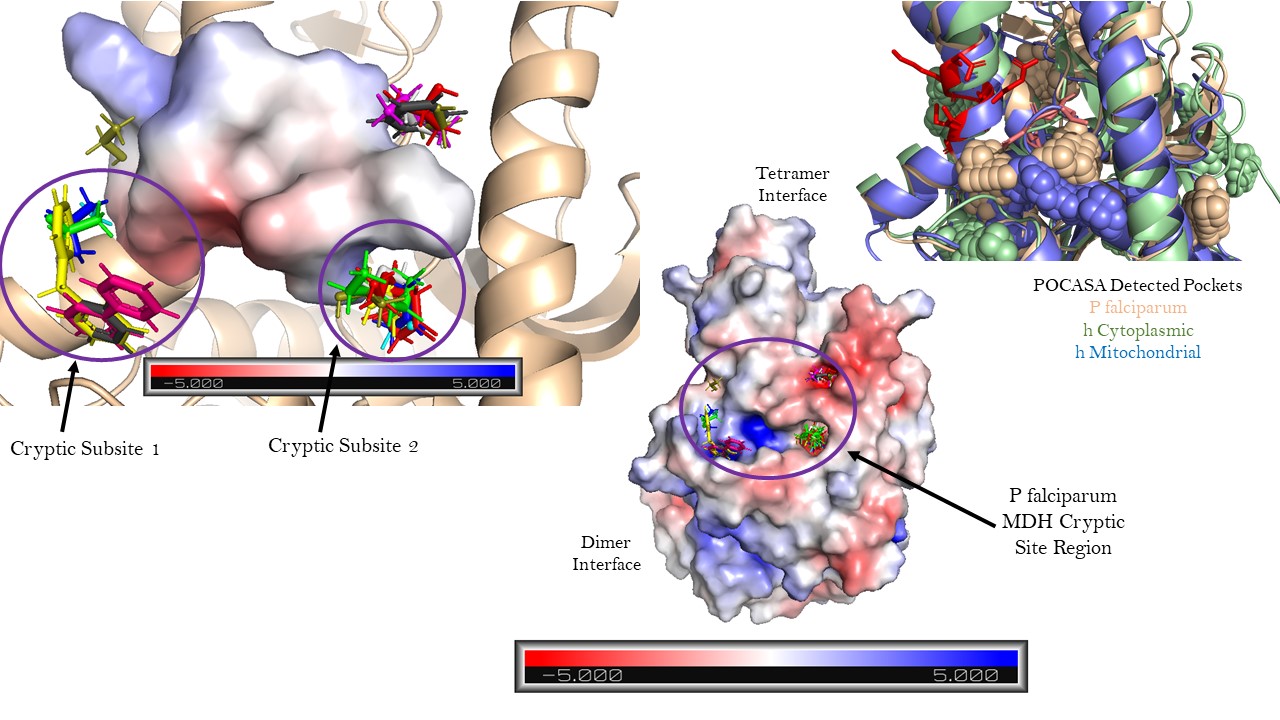