(R2449) A cell culture model/mimic to investigate the biochemical consequences of cdkal1 mutations that result in unprocessed, non-functional insulin and Type 2 Diabetes Mellitus

Abstract: The primary objective of the project is to develop a cell culture model that mimics the pancreatic beta islets to study the biochemical consequences of single nucleotide polymorphisms (SNPs) found in the intron-5 of cdkal1 gene which codes for a tRNA modification enzyme. SNPs in cdkal1 gene has been pointed out for its role in the development of Type 2 Diabetes Mellitus (T2DM) from past few years by human Genome Wide Association Studies. Still we lack a model system to investigate the consequences of cdkal1 mutations that result in unprocessed, non-functional insulin leading to the development of T2DM.

Hypothesis: Incorrectly processed cdkal1 mRNA results in untranslated or incorrectly translated Cdkal1 protein. Cdkal1 protein is a thiomethyl transferase that adds an ms2 moiety to the already modified N6-threonyl carbamoyl adenosine (t6A37) in the 37 position of tRNA. Improperly processed Cdkal1 protein will not be able to modify tRNALys3. Proinsulin will not be correctly translated and processed resulting in little or no insulin secreted from the β- cells in pancreatic islets. To uncover the pathogenesis of the human cdkal1-SNP associated T2DM, the current project will produce a cell culture model of the cdkal1 gene SNP-associated human T2DM. With the model, we will be able to discover the biochemical properties of the insulin, if translated at all. In a cdkal1-knockout (KO) cells, we will rescue the insulin production with WT human cdkal1, and then discover the effects of intron-5 SNPs of the cdkal1 gene. SNPs could affect mRNA processing. Methods and preliminary results: We have successfully knocked down the cdkal1 gene in a murine β-cell line (NIT1) inducible for insulin. Our recent knockdown studies in NIT1 cell lines showed that under KCl insulin induction, unprocessed insulin mRNA increases by ~40% relative to mature insulin mRNA (Fig. B) and cdkal1 mRNA is reduced by ~40%. Subsequent reduction in tRNA ms2 modification and insulin production was also observed upon cdkal1 knockdown. As 100% gene knockout is required to study the effects of SNPs, we now have a murine β-cell line (MIN-cdkal1-null); the parent of that cell line (MIN-cdkal1-het) produces insulin assessed with a glucose- stimulated insulin release (GSIR) assay. The MIN-cdkal1-null having a cdkal1 knockout will be an advantageous tool to evaluate the state of insulin production when Cdkal1 is not modifying tRNALys3. A variant of mini-gene reporter constructs carrying potential SNPs have been designed and will be expressed and analyzed in knockout cell lines to evaluate cdkal1 mRNA processing and splicing events. We are positioned to answer important questions that connect Cdkal1 protein biochemistry to T2DM like, are the human intronic SNPs of the cdkal1 gene cause incorrect processing of cdkal1 mRNA? What is the status of the insulin produced, if at all translated - is proinsulin unprocessed, aggregated or degraded and not secreted? In the long-term, the results of this study will stimulate new insights into the human health implications of tRNA modification enzymes and the role(s) of modifications not just in the pathogenesis of cdkal1 SNP-associated T2DM, but also in a variety of human diseases. 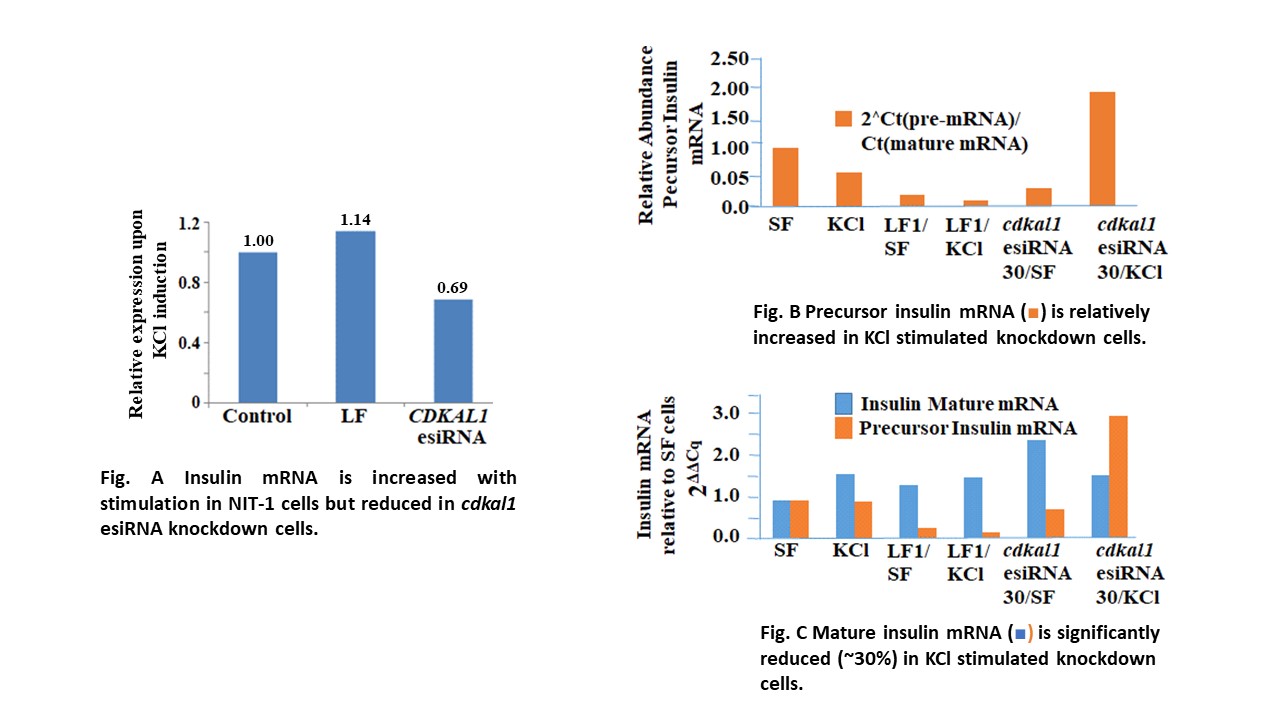