Cysteine cathepsins are a family of cysteine proteases that are normally localized to the lysosome for maintaining homeostasis. In a number of highly invasive cancer cell lines and malignant tumors, cathepsins L and B are highly upregulated and are secreted into the extracellular matrix as pro-enzymes. Upon activation, they promote remodeling of the extracellular matrix and cancer progression and metastasis. A number of studies have demonstrated that cathepsins L and B are overexpressed in breast, ovarian, lung, and colon cancer. The goal is to use the extracellular proteolytic activity of  cathepsin L and/or cathepsin B to cleave drug-linker constructs in the tumor microenvironment to release potent anticancer agents. Drug-linker constructs in this study consist of  a maleimide functional group for attachment of a protein tumor-targeting agent (such as an antibody), a protease cleavable linker, and a cytotoxic effector (payload). Several pre-validated benzosuberene- and dihydronaphthalene-based effectors bind to tubulin at the colchicine binding site and are effective  inhibitors of tubulin polymerization into microtubules. They demonstrate profound cytotoxicity (low nM to pM) against a wide-spectrum of human cancer cell lines. In addition to their antimitotic activity, they exhibit dual-mechanism of action and function as powerful vascular disrupting agents (VDAs), imparting widespread damage to tumor-associated vasculature that results in blood flow shutdown and massive tumor necrosis. The hypothesis is that cathepsin B and/or cathepsin L will effectively and selectively cleave these drug-linker constructs in the tumor microenvironment, thus facilitating release of the potent dual-mechanism effector agents leading to inhibition of tumor growth and metastasis. In this study, substate specificity and cleavage rates were evaluated for a series of benzosuberene- and dihydronaphthalene-based drug-linker constructs incorporating L-Val-L-Cit and other dipeptides. Assay conditions were optimized for each enzyme. Standard curves were obtained for drug-linker constructs and effectors using reversed-phase HPLC. For drug-linker constructs, the maleimide head group was first de-activated by the thiol agent, N-acetyl-L cysteine (NAC), and the products were incubated for variable times with either cathepsin L or B. After dilution of the reaction mixtures with acetonitrile, the release of effector was evaluated by HPLC. Using standard curves, the percent cleavage and the recovery were calculated for each reaction in these rate studies. The L-Val-L-Cit dipeptide linker was cleaved by both cathepsin B and cathepsin L. Rates of cleavage of drug-linker constructs with a series of different dipeptides replacing L-Val-L-Cit were determined. 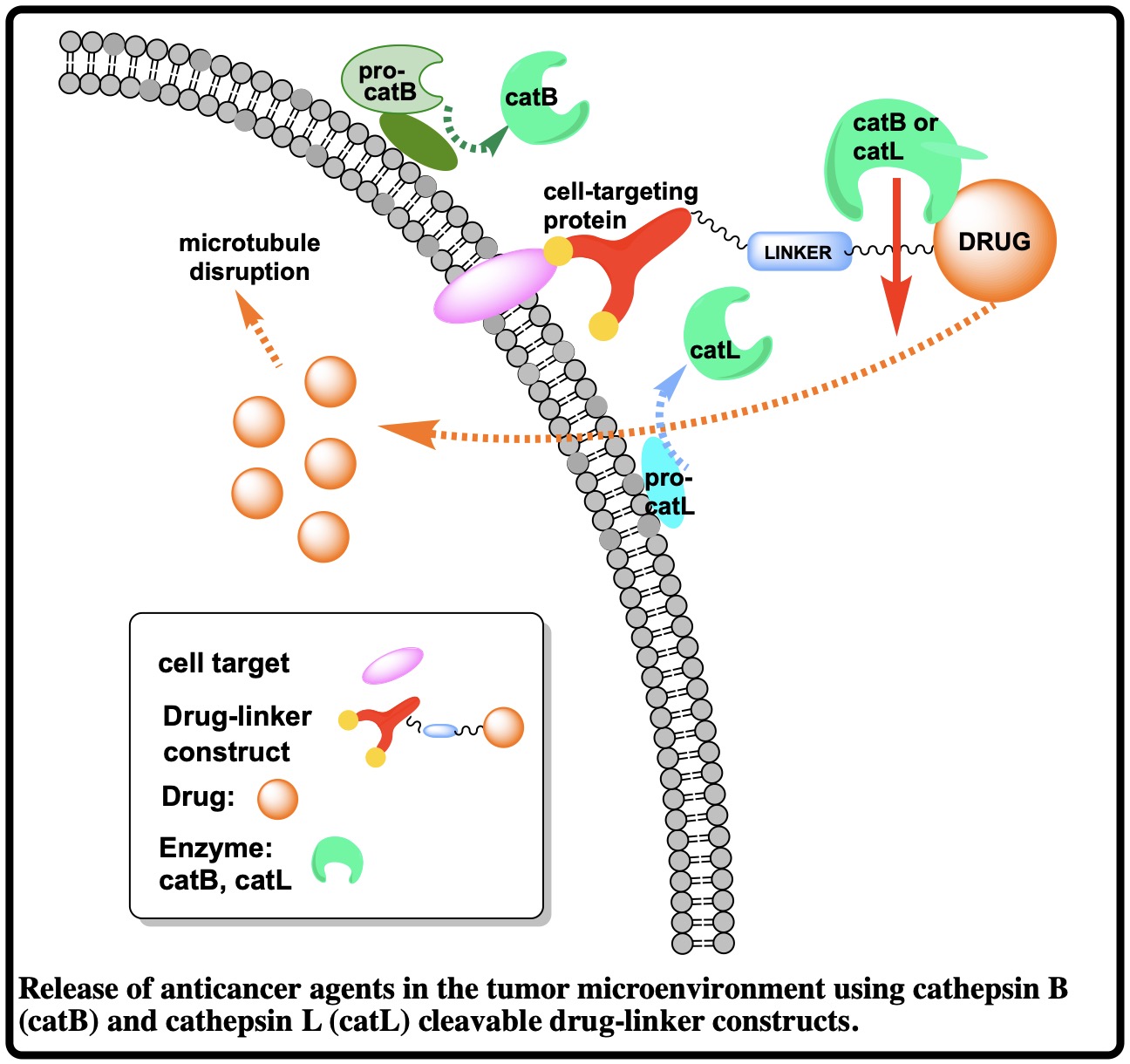