(R441) A Mechanistic Investigation of Cytochrome c Nitrite Reductase Catalyzed Reduction of Nitrite to Ammonia: The Search for Catalytic Intermediates

Cytochrome c Nitrite Reductase (ccNiR) is a periplasmic homodimeric decaheme enzyme that catalyzes the reduction of nitrite to ammonium in a process that involves six electrons and eight protons. Under standard assay conditions, which use a strong reducing agent as an electron source, catalysis takes place rapidly without producing detectable intermediates.  However, intermediates do accumulate when weaker reducing agents are employed, allowing the ccNiR mechanism to be studied.  Herein, the early stages of Shewanella oneidensis ccNiR-catalyzed nitrite reduction were investigated in isolation by using the weak reducing agents N,N,N’,N’-tetramethyl-p-phenylenediamine (TMPD) and the 2-electron reduced form of indigo trisulfonate. Experiments were done with the wild type enzyme (wtccNiR) as well as with R103Q, Y206F, and H257Q variants.

A UV/Vis stopped-flow investigation of the reaction between nitrite-loaded wtccNiR and TMPD revealed for the first time that the reaction proceeds via a transient 1-electron reduced intermediate. Generation of this species is pH-independent, whereas its decay to a previously characterized 2-electron reduced intermediate is fastest at pH 6.8 and significantly slower at higher pH. The pH dependence is ascribed to the rate-limiting cleavage of the nitrite N – O bond, which requires a prior di-protonation predicted to be slow in earlier computational studies.

Under steady-state conditions, S. oneidensis ccNiR catalyzed the slow 1-electron reduction of nitrite to nitric oxide, which was monitored by tracking the concomitant appearance of the colored TMPD+ radical product. The rate of TMPD+ formation was found to be directly proportional to the concentration of TMPD+ at low TMPD concentrations, providing important insights about the mechanism of NO˙ release. The steady-state studies also showed that nitrite is a substrate inhibitor of NO˙ release when TMPD is the electron source, probably because it blocks exit by NO˙ through the nitrite entry channel.

The H257Q variant of ccNiR was found to have 1/400th of the wild type enzyme’s nitrite reductase activity in the standard assay in which methyl viologen monocation radical is the electron source, but nearly normal hydroxylamine reductase activity. This demonstrated that H257 is essential for nitrite reduction but not for reduction of hydroxylamine, a putative intermediate in the catalytic process. UV/Vis spectropotentiometry showed that the nitrite-loaded active site of H257Q still reduced at fairly high applied potential, but the reduction was by one electron, whereas the wild type is reduced in a concerted 2-electron step. The experiments with the variant, coupled with the pH-dependent stopped flow experiments with wtccNiR, confirm H257’s importance in facilitating nitrite reduction, but suggest that its role is to modulate the pKa values of one or more of the waters that form a complex hydrogen bonding network in the active site. This view is more conservative than earlier theoretical predictions of direct histidine involvement in nitrite diprotonation leading to N – O bond cleavage. 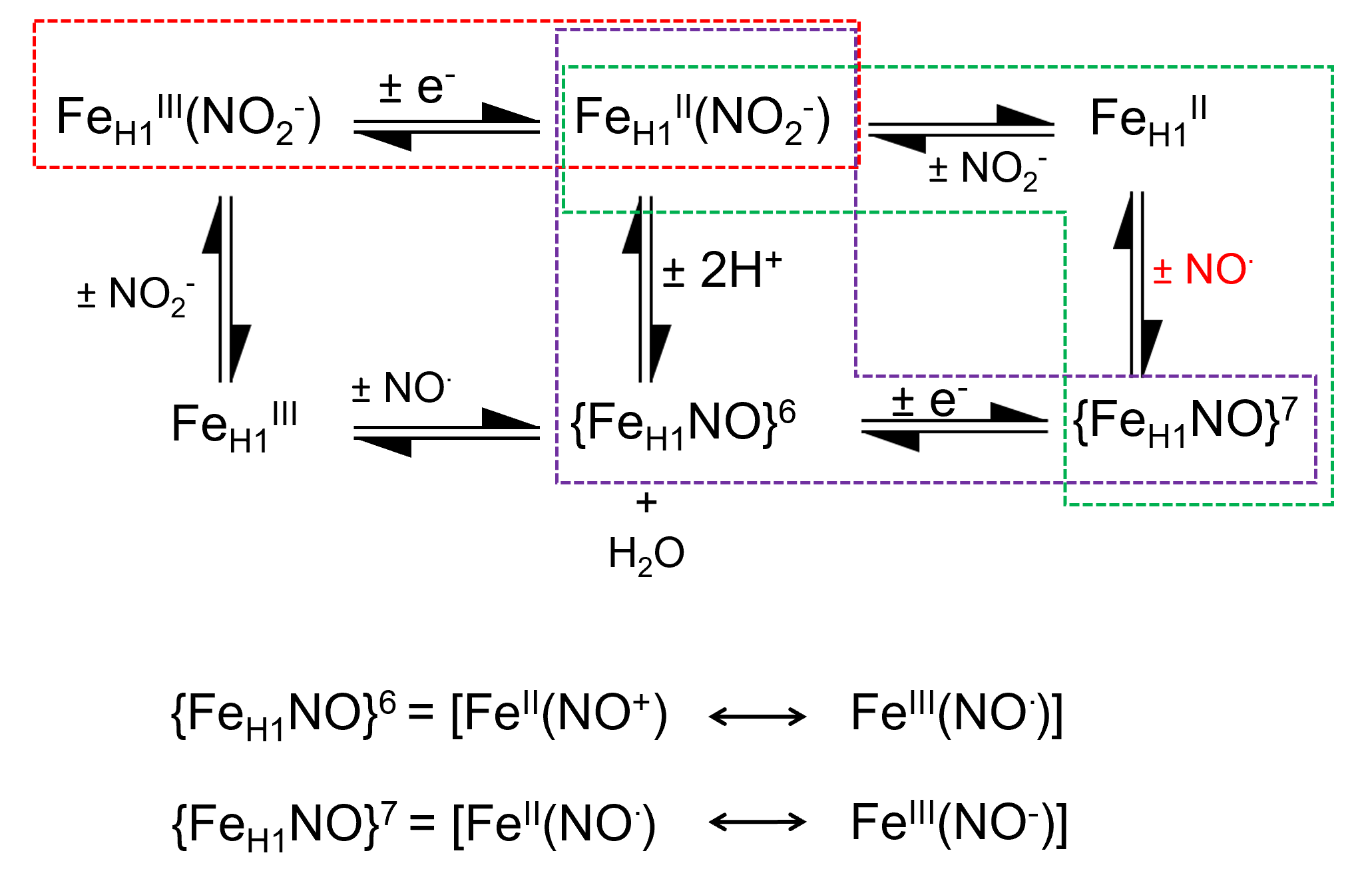