Background: The emergence of resistance among the most important bacterial pathogens is recognized as a major public threat worldwide. The impermeable outer membrane (OM) of gram-negative bacteria plays a significant role in withstanding antibiotic stresses as it is impervious to both large and hydrophobic molecules, very much limiting the access of different antibiotics to cells. Most of the antibiotics that are used to treat gram-positive bacterial infections are ineffective against gram-negative bacteria. To make these antibiotics effective against gram-negative bacteria, mechanism of the OM permeability barrier needs to be revisited. Many factors of outer surface are involved in maintaining of OM-integrity. One of those factor is ECA (Enterobacterial Common Antigen). It is a conserved molecule which presents only in the Enterobacterales’s order. Mitchel et al. (2018) have reported a novel function of the cyclic ECA molecule in maintaining the permeability barrier of the OM in a YhdP (inner-membrane protein) dependent manner in E. coli. Nevertheless, we do not know the mechanism through which YhdP and ECA affect OM-permeability. We are trying to find this mechanism by exploring a ∆yhdP∆fadR double mutant.

Results: We have found that the ∆yhdP ∆fadR double mutant is very sick at 30°C as compared to wild type, a phenotype which is specific to lower temperatures. In addition, we have screened various antibiotics against them and found that the double mutant is sensitive to benzalkonium chloride (cationic surfactant) and bacitracin (polypeptide). Deletion of fadR alone has slight effect on the growth of E. coli and it is sensitive to benzalkonium chloride. In silico database suggests that YhdP interacts with YdgH (a periplasmic protein of unknown function). To find the defect of this double mutant (∆yhdP ∆fadR), we have isolated suppressor mutants. These suppressor mutants were generated by plating the double mutant on LB plate, and allowing growth at 30°C overnight. The isolated suppressor mutants can grow at 30°C. The identified mutants are uspB::Tn10, pitA::Tn10, leuO::Tn10, and hycC::Tn10.We are currently exploring these suppressor mutants.

Conclusion: YhdP-FadR interaction is essential for survival at 30°C. Generation of suppressor mutants make the ∆yhdP∆fadR mutant to survive at low temperature. One of the identified suppressor mutants, leuO plays an important role in low temperature (Klauck et al., 1997; Repoila & Gottesman, 2003).This indicates that LeuO might be involved in of bacterial growth at 30°C. These studies will lead to better understanding of resistance mechanisms in gram-negative bacteria and help in target-based designing of antibiotics. 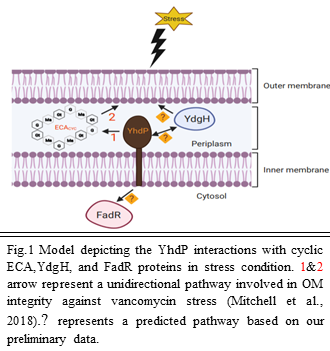