Inosine 5’-monophosphate dehydrogenase (IMPDH) catalyzes the oxidation of IMP to XMP, with concomitant reduction of NAD+ to NADH. This is the pivotal step for de novo guanine nucleotide biosynthesis. The structural and functional differences between mammalian and bacterial IMPDHs make this a promising antibiotic target. Selective and potent inhibitors of bacterial IMPDHs with different scaffolds, like A110 and C91, bind in the cofactor site. Despite the high conservation of this site, some inhibitors display a surprising preference for certain bacterial IMPDHs. The structural basis for this selectivity is unclear even though 16 crystal structures of IMPDH-inhibitor complexes have been solved. IMPDH contains an active site flap that is highly dynamic and disordered. Here, we hypothesize that transient interactions with the flap may account for varied inhibitor potencies. In this work, we report a mutagenesis study and pre-steady-state stopped-flow kinetic investigation of Bacillus anthracis IMPDH (BaIMPDH) aimed to determine the role of the flap in inhibitor selectivity.  We introduced a L413A flap mutation in BaIMPDH and measured how inhibitor potencies changed. The results show some inhibitors (eg. A110) have the same potency towards both wild type and mutant enzymes, but other inhibitors (eg. C91) were found to have different potencies. To determine if the mutation changes the relative amount of inhibitor binding intermediates in catalytic cycle, we performed stopped-flow kinetic experiments to defined eleven microscopic rate constants and two equilibrium constants that characterize both the catalytic cycle and details of the inhibition mechanism. Together with steady-state initial rate studies, the results obtained for wild type BaIMPDH show that both A110 and C91 binds with high affinity predominantly to the covalent intermediate (E-XMP*) on the reaction pathway (Kd ≈ 50 nM for A110 and Kd ≈ 40 nM for C91). Only a weak binding interaction (Kd ≈ 1 μM) is observed between A110 and E•IMP, while C91 has a bit stronger interaction with E•IMP (Kd ≈ 0.5 μM). Further pre-steady-state stopped-flow kinetic investigation for BaIMPDH/L413A are in progress to determine the effects of this particular mutation on the microscopic rate constants that characterize the catalytic cycle and on the details of the inhibition mechanism. 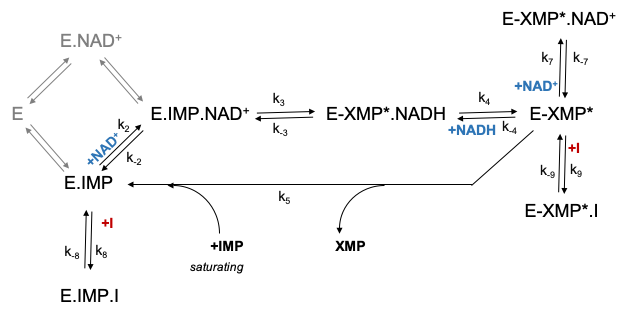