Tuberculosis (TB) is caused by Mycobacterium tuberculosis, and remains a major, worldwide health concern. The emergence of M. tuberculosis strains that are resistant to front line antimycobacterial drugs such as isoniazid and rifampicin have greatly complicated efforts to control the spread of TB. Of the various resistance mechanisms, the most effective involves the production of β-lactamases that hydrolyze β-lactam antibiotics. The intrinsic resistance to β-lactam antibiotics was due mainly to the presence of a chromosomally encoded gene (blaC) in M. tuberculosis for a Class A, Ambler β-lactamase (BlaC). The BlaC enzyme has already been validated as one of the leading targets of tuberculosis therapy. In the search for new β-lactamase inhibitors we employed structure-based in silico screening of commercially available libraries of chemical compounds by using the on-line server Pharmit (pharmit.csb.pitt.edu). We aimed to discover novel 3-D pharmacophores features and further performed molecular docking of selected compounds provided by ChEMBL/MolPort/ZINC databases using Autodock Vina package and M. tuberculosis β-lactamases BlaC 3M6B.pdb, 1FSY.pdb (AMP-C), and 1PZP.pdb (TEM-1) as target proteins. The combination of 3-D pharmacophore screening and molecular docking lead to the discovery of natural products, and novel, small molecules potential inhibitors of targeted β-lactamases. We further complemented the “in silico” screening with additional molecular docking experiments employing scoring functions provided by “LeDock”, “ICM Docking” and SeeSAR (BiosolveIT (Germany, UK)) which provided important structural insights into the main pharmacophore features with significant contribution to the free energy of interaction between the hit ligands and the targeted proteins. The binding affinities of the highest scoring hits were measured in vitro revealing low μM inhibitory activity toward BlaC while showing an “activator” effect towards AmpC and TEM-1. Additionally, the in vitro screening platform, using kinetics of β-lactamase inhibition with nitrocefin substrate, enabled the discovery of other potential inhibitors of BlaC β-lactamase exhibiting inhibitory constants, Ki, in the low mM range.  We also present the expansion of a peptide-pharmacophore space which lead to the discovery of cyclo [RRXY] tetrapeptides analogues that had at least a six-fold higher affinity for the BlaC β-lactamase than its linear sequence, RRHY.  Moreover, we further discovered novel dipeptide-pharmacophores derived from tetrahydroharman acid, D-cyclohexylalanine and fluoro-phenylglycine exhibiting promising inhibitory activity against BlaC and AmpC beta lactamases, having Ki in the lowest tens of μM range.  We further tested  the lead compounds on the in vitro growth of mc26230 and found that the lowest concentration of beta lactamase inhibitors that prevented the bacterial growth was in the order of 100-500 μM for selected dipeptide and tetrapeptides compounds. 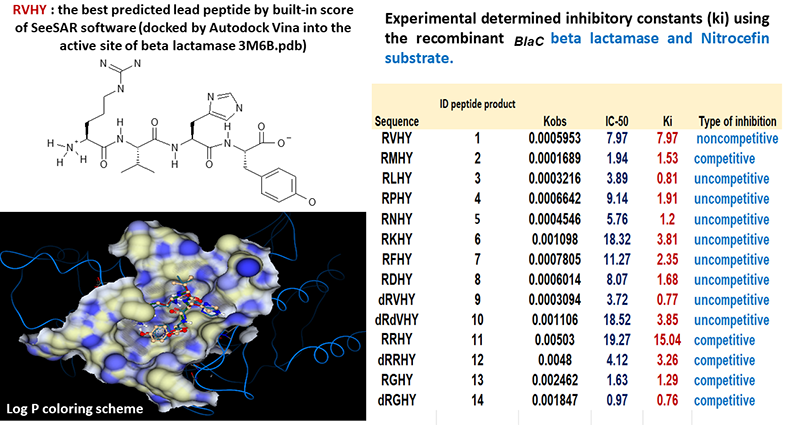