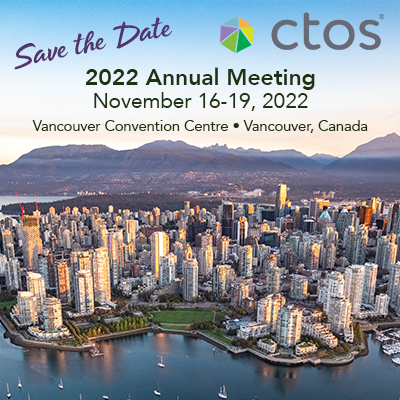 Objective: AXL is a Receptor Tyrosine Kinase (RTK) that plays a role in processes like survival and angiogenesis in healthy cells. In several malignancies, aberrant expression of AXL has been linked to worse prognosis, disease progression, EMT and metastasis. Also, this RTK has been associated with therapy resistance; including conventional, targeted and immune therapies1,2.
In the context of sarcomas, often therapy refractory, there are some studies on the role of AXL3,4. Many highlight the connection between AXL increased expression and poorer prognosis. Additionally, some show cell lines with reduced cell proliferation when targeting AXL in vitro. Nevertheless, the definite role of AXL in Soft Tissue Sarcoma (STS) and its targetability remains unclear. Particularly, research in pre-clinical models is needed. Also, the immunomodulatory effects of AXL and its therapeutic potential is largely unknown.
The goal of the present project is to examine the role and potential targeting of AXL in STS. Understanding its effect on both tumor cells and the tumor microenvironment (TME) to generate rational drug combinations for Soft Tissue Sarcoma.

Methods: Mouse cell lines 17-1 and 17-3 were kindly provided by Paul Krimpenfort. All sarcoma human cell lines were derived from patient samples in-house after informed consent. Melanoma and sarcoma murine cells were maintained in DMEM (GIBCO) and sarcoma primary cell lines in Advanced DMEM/F12 (Gibco); all of them supplemented with 9% fetal bovine serum (Sigma), 100 units per ml of penicillin and 100 μg per ml of streptomycin (GIBCO) and 1% GlutaMAX (Gibco).

For Flow Cytometry cells were stained using a 1:50 dilution of either Mouse AXL antibody (R&D Systems) and analyzed on a Fortessa flow cytometer (BD Bioscience). For measuring AXL molecules on the cell surface, DAKO Qifikit was used. In brief, cells were stained with isotype control IgG1 or AXL antibody (1:100, ab89224, Abcam). Secondary antibody from the Qifi kit was used (Goat-α-mouse FITC). The number of AXL molecules on each cell was calculated using calibration beads from the Qifi kit according to according to manufacturer's instructions.

For in vivo studies 1*106 cells were admixed with Matrigel and injected subcutaneously in either NSG-β2Mnull or FVB. Growth was monitored three times per week with calipers, and tumor size was calculated using the following formula: ½ × length (mm) × width (mm). All experiments ended for individual mice either when the tumor volume exceeded 500 or 1000 mm3, when the tumor showed ulceration, in case of serious clinical illness, when the tumor growth blocked the movement of the mouse, or when tumor growth assessment had been completed.

Treatments with BGB324 was carried out for 72h and readout was performed with Cell Titer Blue according to manufacturers instruction.

Results: We used cell lines derived from sarcoma lesions of CDKN2AB KO mice. Of note, CDKN2A deep deletion is a relevant genetic feature in many sarcomas. These cell lines were able to establish succesfully after injection in syngeneic mice. Then, we generated AXL KO in cell by CRISPR-Cas9 and confirmed KO efficiency by Flow Cytometry (Fig.1) and Western Blot (Data not shown).
Afterwards, sgControl and sgAxl cell lines were injected in both immune deficient (NSG) and competent (FVB) mice. Despite successfully establishing in NSG, cell line 17-3 sgRNAs did not grow in an immune competent setting. Interestingly, cell line 17-1 sgAxl had a statistically significant growth disadvantage in both NSG (Fig. 2A) and FVB (Fig. 2B). This finding suggests a dual role for AXL: on intrinsic tumor growth and an immune-modulatory effect.
Moreover, thorough analysis of these tumors was performed. Firstly, H&E staining and analysis by animal pathologist confirmed the lesions were sarcomatous, encountering spindle cell and undifferentiated pleomorphic regions. Importantly, morphology was found to be representative of human counterparts. Furthermore, we analyzed immune infiltration upon AXL KO. Albeit not significant, there was a trend towards more immune infiltration upon AXL ablation (Fig. 2C).
We also checked AXL in human sarcoma cell lines. For this purpose, we included melanoma cell lines with known AXL expression levels as a benchmark1. Being SkMel28 with very low AXL, SkMel28R (BRAF+MEKi resistant counterpart) very high and A875 a medium-high AXL level. Interestingly, all of the sarcoma cell lines analyzed so far, had a high number of AXL molecules in the surface (Fig. 3).
Afterwards, a well-established AXL inhibitor BGB324 (Bemcentinib) was tested in this panel of cells. BGB324 markedly reduced cell viability and proliferation of most cell lines (Fig. 4). However, when we included cell lines with marginal levels of AXL, such as SkMel28, they were also affected by this AXL inhibitor.

Conclusion: We wanted to use relevant pre-clinical sarcoma models, which constitute an important challenge within the sarcoma field. Thus far, we have successfully transplanted 2 sarcoma murine cell lines with relevant histologies according to our pathologists.

In one of this cell lines, we show that AXL KO cells present a growth disadvantage in vivo compared to their WT counterparts. So, AXL not only affects sarcoma growth but affects tumor-immune crosstalk. This finding was further supported by a mild increase in immune infiltration when AXL was absent.

When looking at human cells, we found that our current panel of sarcoma cell lines show considerable levels of AXL. Moreover, we treated our cells with the AXL inhibitor BGB324 or Bemcentinib. This inhibitor is currently in several Phase I and II clinical trials. Surprisingly, in the same set of experiments, we found that some of our melanoma cells with very low AXL expression -SkMel28- was highly sensitive to this AXL selective inhibitor. Which suggested some AXL independent cytotoxicity. In fact, we found some reports of these effects in literature as well5. Next steps include the treatment of AXL KO cells with this inhibitor to further understand its specificity and try other AXL inhibitors available.

Importantly, AXL is not only expressed by malignant cells but also by certain immune subsets such as macrophages, NK cells and DCs. In fact, a recent study showed that AXL expression promotes upregulation of PD-L1 in DCs thus dampening anti-tumor immune response. Therefore, targeting AXL with an inhibitor would allow a dual effect in both tumor and immune cells that we find very attractive.

Our future work will focus on additional elucidation of the changes in tumor control and within the immune compartment upon AXL targeting either genetically or pharmacologically in our syngeneic mouse models. Furthermore, studying the potential to combine AXL inhibition with immunotherapy. 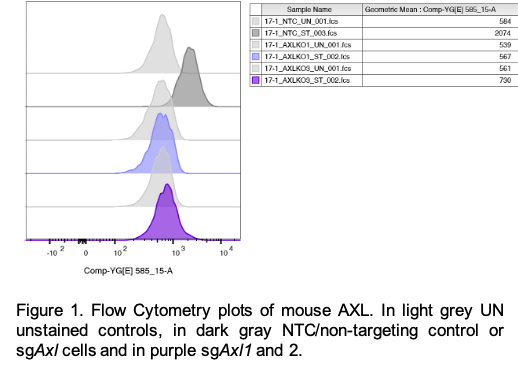 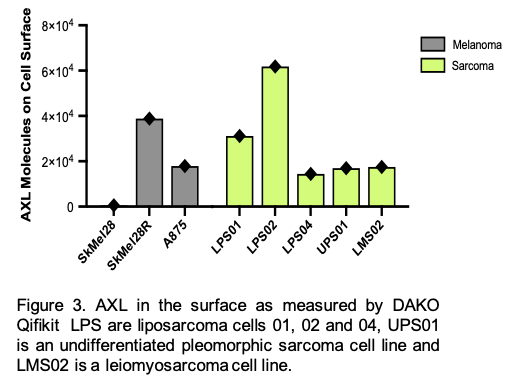 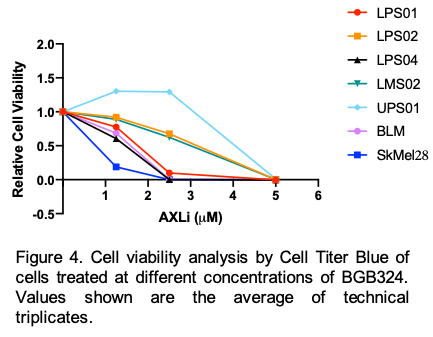