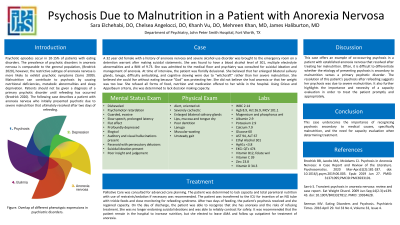 Psychotic episodes occur in 10-15% of patients with eating disorders (Brodrick 2020). Patients with anorexia nervosa, restrictive type are more likely to experience psychosis symptoms (Sarro 2009). Malnutrition can contribute to psychosis symptoms by causing nutritional deficiencies, metabolic abnormalities and sleep deprivation. Patients should not be given a diagnosis of a primary psychotic disorder until refeeding has occurred (Brodrick 2020).

A 32 year old female with a history of anorexia nervosa and severe alcohol use disorder was brought to the emergency room on a detention warrant after making suicidal statements. She was found to have a blood alcohol level of 301, multiple electrolyte abnormalities and a BMI of 9.73. She was admitted to the medical floor and psychiatry was consulted for suicidal ideation and management of anorexia. At time of interview, the patient was floridly delusional. She believed that her enlarged bilateral salivary glands, lanugo, difficulty ambulating, and cognitive slowing were due to “witchcraft” rather than her severe malnutrition. She believed she could live without eating because “God” was protecting her. She did not believe she has anorexia or that her weight is too low. She refused all forms of food and nutrition that were offered while she was at the hospital and refused psychotropic medications. Using Grisso and Appelbaum criteria, she was determined to lack decision making capacity.

Palliative Care was consulted for advanced care planning. The patient was determined to lack capacity and total parenteral nutrition with use of restraints/sedation if necessary was recommended. The patient was transferred to the ICU for the insertion of an NG tube with trickle feeds and close monitoring for refeeding syndrome. After 2 days of feeding, the patient’s psychosis symptoms resolved and she was able to regain capacity. On the day of discharge, the patient was able to recognize that she has anorexia and the risks of refusing treatment. She was not endorsing suicidal ideation and was able to reliably contract for safety. It was recommended that the patient remain in the hospital to increase nutrition, but she elected to leave AMA and follow up outpatient for treatment of anorexia.

The resolution of this patient’s psychosis after refeeding suggests her psychosis was due to severe malnutrition. This case underscores the importance of recognizing psychosis secondary to medical causes and the need for capacity evaluation when determining treatment.