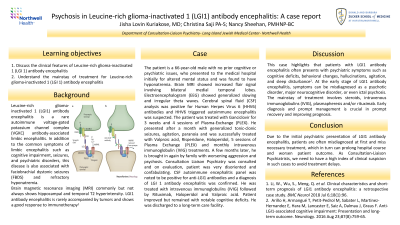 
Case: The patient is a 66-year-old male with no prior cognitive or psychiatric issues, who presented to the medical hospital initially for altered mental status and was found to have hyponatremia. Brain MRI showed increased flair signal involving bilateral medial temporal lobes. Electroencephalogram (EEG) showed generalized slowing and irregular theta waves. Cerebral spinal fluid (CSF) analysis was positive for Human Herpes Virus 6 (HHV6) antibodies and HHV6 triggered autoimmune encephalitis was suspected. The patient was treated with Ganciclovir for 3 weeks and 4 sessions of Plasma-Exchange (PLEX). He presented after a month with generalized tonic-clonic seizures, agitation, paranoia and was successfully treated with Valproic acid, Risperidone, Haloperidol, 5 sessions of Plasma Exchange and monthly intravenous immunoglobulin (IVIG) treatments. A few months later, he is brought in again by family with worsening aggression and psychosis. Consultation Liaison Psychiatry was consulted and on evaluation, patient was very disoriented and confabulating. CSF autoimmune encephalitis panel was noted to be positive for anti-LGI1 antibodies and a diagnosis of LGI 1 antibody encephalitis was confirmed. He was treated with intravenous immunoglobulins (IVIG) followed by Rituximab, Haloperidol and Valproic acid. Patient improved but remained with notable cognitive deficits. He was discharged to a long-term care facility.


Conclusion: Due to the initial psychiatric presentation of LGI1 antibody encephalitis, patients are often misdiagnosed at first and miss necessary treatment, which in turn can prolong hospital course and worsen the patient’s outcome. As Consultation-Liaison Psychiatrists, we need to have a high index of clinical suspicion in such cases to avoid treatment delays.