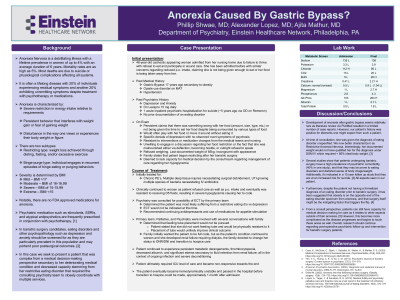 Anorexia has lifetime prevalence in women of up to 4%, lasting an average 6 years. 20% experience residual symptoms; another 20% have unremitting symptoms. Anorexia is characterized by restriction in energy intake relative to requirements, behavior that interferes with weight gain, and disturbance in how one views their weight or figure. (Cass, 2020) In bariatric surgery candidates, eating disorders and psychopathology are screened for as they may portend poor postsurgical outcomes. (Yen, 2014) We seek to present a patient that was complex from a decision-making perspective secondary to her medical condition and decreased capacity stemming from her restrictive eating disorder.

Forty-six-year-old cachectic woman admitted from nursing home due to failure to thrive with reduced p.o. intake. Past medical and psychiatric history is significant for gastric bypass 17 years ago, depression, anxiety, and one suicide attempt. No documented eating disorder.

She was admitted for chronic PE’s, multiple deep tissue injuries, and UTI. Her condition continued to worsen as she resisted care and p.o. intake becoming hypoglycemic and coding. Psychiatry was consulted for capacity for various interventions including feeding tube placement and possible ECT.

Patient persistently claimed something was wrong with her food or not being given the time to eat. She denied depression, demonstrated no psychosis, and was unwilling to engage in a discussion regarding her food restriction or weight, and refused to be weighed. Family stated she began restricting after her bariatric surgery. Patient was deemed by the consult team to lack capacity for managing care regarding her hypoglycemia.

After close discussion with the primary team and the family, it was felt aggressive intervention would not meaningfully improve her condition. She passed awaiting hospice.

The patient was diagnosed with eating disorder unspecified. We now better characterize it as Restrictive Anorexia Nervosa. Studies show that bariatric surgery patients may be prone to eating disorders and are at an increased risk for suicide. (Yen, 2014) Despite the patient not having a formalized diagnosis of an eating disorder prior to bariatric surgery, it has been suggested that obesity is on the opposite end of the eating disorder spectrum from anorexia, and surgery itself might be the instigating factor that triggers the flip. (Deitel, 2002)

Conclusion: Research should continue regarding rates of anorexia in post-operative bariatric surgery patients and the role psychiatric follow-up can play in mitigation.