(PO-016) ECT Resolving Catatonia in a Huntington’s Disease Patient: A Case Report and Review of Literature 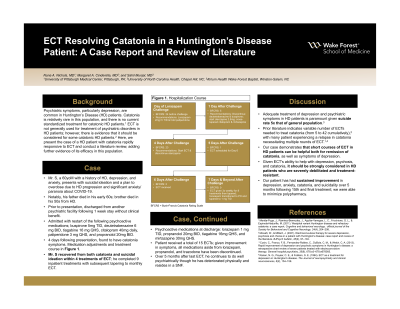 Background: Psychiatric symptoms, particularly depression, are common in Huntington’s Disease (HD) patients. Catatonia is relatively rare in this population, and there is no current standardized treatment for catatonic HD patients (Merida-Puga et al., 2011). ECT is not generally used for treatment of psychiatric disorders in HD patients; however, there is evidence that it should be considered for some catatonic HD patients (Mowafi and Millard, 2021). Here, we present the case of a HD patient with catatonia rapidly responsive to ECT and conduct a literature review, adding further evidence of its efficacy in this population.


Case: Mr. S is a 60-year-old male with a history of HD, MDD, and anxiety who presented to the ED with suicidal ideation and a plan to overdose due to his disease progression, significant anxiety, and paranoia surrounding the COVID-19 pandemic. He was previously admitted to another psychiatric hospital without clinical benefit. His psychotropic regimen at admission included buspirone, citalopram, deutetrabenazine, paliperidone, propranolol, and tiagabine.

Four days into his admission, he was nonresponsive on interview. Given concern for catatonia (Bush-Francis Rating Scale, BFRS, 24), a successful lorazepam challenge was administered. Paliperidone was held and lorazepam was scheduled. In the subsequent days, multiple medication changes were made, including discontinuation of deutetrabenazine given concern for depression exacerbation. ECT was started due to continuation of catatonia symptoms despite scheduled lorazepam (BFRS fluctuating from 1 to 23). Following his first two treatments, he resumed oral intake, and his BFRS reduced to 0. By ECT #3, he was speaking fluently with improvement in his mood and suicidal ideation. Following an initial series of eight ECT, treatments were tapered with maintained improvement.


Discussion: Our patient had complete resolution of his catatonia and remission of depression with a short course of ECT, experiencing profound improvement even two treatments into the course. Prior case reports indicated the need for longer ECT courses before resolution with the minimum being five treatments and the maximum being 42 (Mowafi and Millard, 2021). However, our patient has had sustained improvement in mood and catatonia symptoms allowing for minimization of polypharmacy.

Implications: Given the neuropsychiatric burden in HD patients, it is important for C-L psychiatrists to be aware of ECT's efficacy for both depression and catatonia in this population.