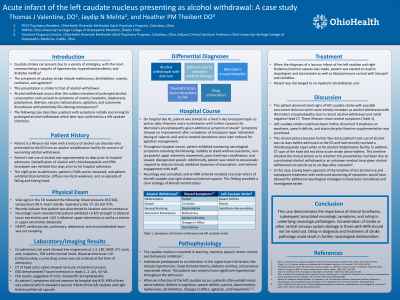 Acute Infarct of the Left Caudate Presenting as Alcohol Withdrawal: A Case Study

Patient is a 48-year-old male who presented from an alcohol rehabilitation facility for worsening alcohol withdrawal after 4 days of detoxification with benzodiazepine taper. The night prior to admission, patient exhibited increased CIWA scores, disorientation, diffuse weakness, and an episode of falling. Patient demonstrated hypertension, disorientation, and bilateral weakness in all extremities. Head CT was negative. On hospital day 1, patient was started on a 5-day lorazepam taper and daily thiamine and multivitamins with further concerns for Wernicke’s encephalopathy given symptom of ataxia. Symptoms showed no improvement after lorazepam taper. Patient exhibited worsening neurological symptoms including non-purposeful extremity movements, poor hand-eye coordination, and slowed, disorganized speech. Patient was noted to exhibit response to internal stimuli, looseness of association, and minimal engagement with staff. Neurology was consulted, and an MRI revealed a lacunar infarct of the left caudate and right thalamus/internal capsule. This finding provided a clear etiology of altered mental status.

This patient demonstrated signs of left caudate stroke which were initially mistaken as alcohol withdrawal. Both share several symptoms including tremor, confusion, disorientation, agitation, affect changes, and disinhibition (Driscoll, 2020; Weaver, 2019). Stroke pathology could have been discerned if weakness, speech deficits, and ataxia were emphasized. This clinical picture was complicated by the timeline of last alcohol use (6 days prior to presentation) and negative Head CT. Alcohol withdrawal is known to last up to 6 days (Victor, 1966). Other differentials should have been considered at this point. In this case, having been cognizant of the timeline of last alcohol use with continued worsening of symptoms after treatment would have allowed for earlier investigation of additional neurological etiologies.

This case demonstrates the importance of the clinical timeframe, subsequent neurologic symptoms, and being mindful of possible underlying neurologic pathologies. Stroke or other central nervous system damage in altered mental status should not be ruled out. Delay in diagnosis of stroke pathology could result in further neurological deterioration.