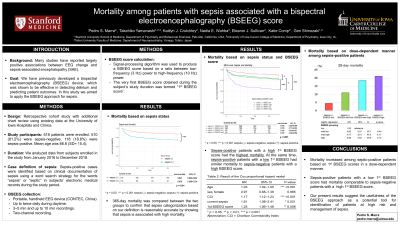 Background: Current criteria of sepsis (Sepsis-3) require an interpretation of mental status included in the quick Sequential Organ Failure Assessment (qSOFA) [1, 2]. Altered mental status was defined using a Glasgow Coma Scale < = 13, which requires a careful exam of the eye, verbal, and motor exam at the bedside  [1, 2]. However, the interrater reliability of GSC is moderate [3], so there is a need for more objective measurements. Common neuropsychiatric presentation of sepsis is delirium- sometimes called sepsis-associated encephalopathy. We have previously developed a bispectral electroencephalography (BSEEG) device, which was shown to be effective in detecting delirium and predicting patient outcomes [4]. In this study, we applied the BSEEG approach for the identification of patients with sepsis at high risk for poor outcomes.

Methods: This was a retrospective cohort study with additional chart review using an existing dataset collected through previous clinical observational studies of delirium at the University of Iowa Hospitals and Clinics. Sepsis-positive cases were identified based on retrospective chart review. EEG raw data and calculated BSEEG scores were obtained in the previous studies. The relationship between BSEEG scores and sepsis was analyzed, as well as the relationship among sepsis, BSEEG score, and mortality.


Conclusion: The 1st BSEEG score showed a significant difference between groups of patients based on their status for sepsis. Also, the  1st BSEEG score was able to predict patients at high risk of mortality, demonstrating its usefulness as a potential tool for the care of septic patients by identifying those at high risk.