(PO-026) The intersection between psychopathology and inflammation: A review of the current evidence 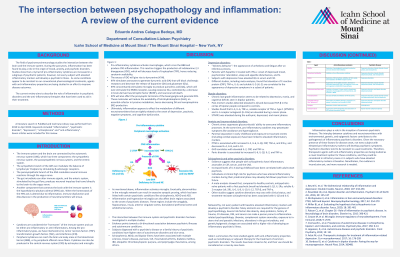 Psychoneuroimmunology studies the interaction between the brain and the immune system. Inflammation is considered to play a role in the origin of mood, anxiety, and psychotic disorders1,2,3,4. In addition, various pro-inflammatory cytokines are increased in a subgroup of these patients5. This current review describes the role of inflammation in psychiatric illnesses and the anti-inflammatory treatments used for these conditions.

A literature search in PubMed and Cochrane Library was performed from 2010 to April 2020. Keywords included "inflammation", "psychiatric disorder", "depression", "schizophrenia" and "anti-inflammatory". Ten articles were included for this review.

Cytokines cross the blood-brain barrier and affect the hypothalamic-pituitary-adrenal axis, impacting cortisol and the availability of dopamine, serotonin, and noradrenaline due to disruptions in tryptophan, tyrosine, and glutamate metabolism4,5. Pro-inflammatory molecules can affect certain brain regions associated with psychiatric symptomatology2,4. Inflammation can generate microglial abnormalities that result in excessive pruning, a feature associated with psychiatric illnesses6.

The relationship between inflammation and neuropsychiatric diseases appears to be bi-directional. There is a higher prevalence of autoimmune disorders in patients with psychiatric conditions1,4,7 and vice versa8.

Interaction of inflammatory particles with genetic, epigenetic, and environmental factors seems to be required for psychiatric disorders' pathogenesis4,5. Hence, not every person with baseline elevated cytokines will develop psychiatric disturbances.

Regarding treatment, medications with anti-inflammatory properties have been studied as therapeutic agents for several psychiatric disorders2,4,9. Interestingly, data also support the notion that inflammation could be decreased by mood stabilizers10, antidepressants and antipsychotics4,9, strengthening the correlation between psychopathology and inflammation.

The interaction of inflammation with environmental and genetic factors contributes to the pathogenesis of common psychiatric disorders. Thus, anti-inflammatories are being studied as novel treatment options, but further research is required.