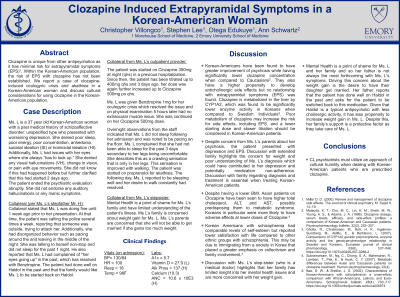 Has Audio
Title: Clozapine-Induced Extrapyramidal Symptoms in a Korean-American Woman

Within the Korean-American population, the risk of EPS with clozapine has not been established. We report a case of clozapine-induced oculogyric crisis and akathisia in a Korean-American woman and discuss cultural considerations for using clozapine in this population.

Ms. L is a 37-year-old Korean-American woman with history of schizoaffective disorder, unspecified type who presented for depression and symptoms consistent with oculogyric crisis. Per collateral, Ms. L’s outpatient clozapine dose was increased from 350mg to 500mg three days prior. Benztropine resolved her oculogyric crisis, but she was subsequently found to have akathisia treated with propranolol.

Despite clinical improvement, Ms. L’s parents requested Ms. L be titrated off clozapine. Discussion with her extended family indicated concern for weight gain and its social consequence, as well as limited insight regarding the severity of her disease.

Korean-Americans have been found to have greater improvement of psychosis while having significantly lower clozapine concentration when compared to Caucasians (Matsuda et al, 1996). They also had a higher propensity to develop anticholinergic side effects, however no relationship with EPS was found. Clozapine is metabolized in the liver by enzyme CYP1A2, which was found to have significantly lower activity in Koreans when compared to Swedish individuals (Ghotbi et al, 2007). Poor metabolism of clozapine may increase the risk of side effects, including EPS, and a lower starting dose and slower titration should be considered in Korean-American patients.

Despite concern from her parents about her psychosis, the patient presented with depression and EPS. Studies found that Korean-American patients with schizophrenia had stronger family orientation and overall lower satisfaction with life (Bae and Brekke, 2002). Discussion with extended family highlights the concern for weight and poor understanding of Ms. L’s diagnosis which could have contributed to her depression and potential medication non-adherence. Discussion with family regarding diagnosis and treatment and consideration of cultural factors is essential when treating patients of all ethnic groups.

CL psychiatrists must utilize an approach of cultural humility when dealing with Korean-American patients who are prescribed clozapine.