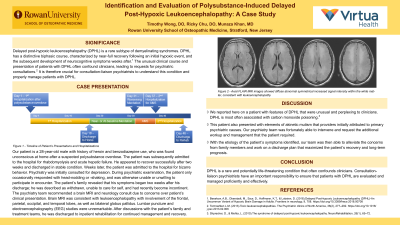 Delayed post-hypoxic leukoencephalopathy (DPHL) is a rare subtype of demyelinating syndromes. DPHL has a distinctive biphasic course, characterized by near-full recovery following an initial hypoxic event, and the subsequent development of neurocognitive symptoms weeks after (Beeskow, 2018). The unusual clinical course and presentation of patients with DPHL often confound clinicians, leading to requests for psychiatric consultations (Tormoehlen, 2013). It is therefore crucial for consultation-liaison psychiatrists to understand this condition and properly manage patients with DPHL.

Our patient is a 28-year-old male with history of heroin and benzodiazepine use, who was found unconscious at home after a suspected polysubstance overdose. The patient was subsequently admitted to the hospital for rhabdomyolysis and acute hepatic failure. He appeared to recover successfully after two weeks and discharged in stable condition. Weeks later, the patient was admitted to the hospital for bizarre behavior. Psychiatry was initially consulted for depression. During psychiatric examination, the patient only occasionally responded with head-nodding or -shaking, and was otherwise unable or unwilling to participate in encounter. The patient’s family revealed that his symptoms began two weeks after his discharge; he was described as withdrawn, unable to care for self, and had recently become incontinent. The psychiatry team recommended a brain MRI and neurology consult due to concerns over patient’s clinical presentation. Brain MRI was consistent with leukoencephalopathy with involvement of the frontal, parietal, occipital, and temporal lobes, as well as bilateral globus pallidus. Lumbar puncture and electroencephalography (EEG) studies were unremarkable. After discussions with the patient’s family and treatment teams, he was discharged to inpatient rehabilitation for continued management and recovery.

We reported here on a patient with features of DPHL that were unusual and perplexing to clinicians. DPHL is most often associated with carbon monoxide poisoning (Shprecher, 2010). This patient also presented with elements of akinetic mutism that providers initially attributed to primary psychiatric causes. Our psychiatry team was fortunately able to intervene and request the additional workup and management that the patient required. With the etiology of the patient’s symptoms identified, our team was then able to alleviate the concerns from family members and work on a discharge plan that maximized the patient’s recovery and long-term prognosis.

DPHL is a rare and potentially life-threatening condition that often confounds clinicians. Consultation-liaison psychiatrists have an important responsibility to ensure that patients with DPHL are evaluated and managed proficiently and effectively.