(PO-057) Identifying Negative Symptoms in the Consult Setting: A Case Report and Review of Literature 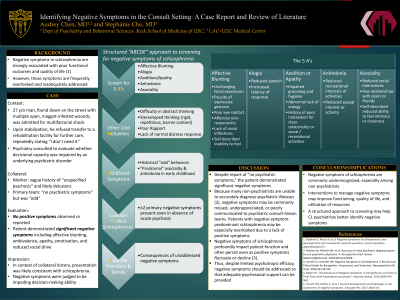 Has Audio
Background: Negative symptoms are strongly associated with poor functional outcomes and poor quality of life in patients with schizophrenia (Galderisi, 2018). However, they are frequently missed and are less adequately addressed than positive symptoms. We present a case of a young man with negative symptom-predominant schizophrenia and provide a review of the literature.

Case: Mr. X is a 27-year-old man admitted for multifactorial shock after being found down on the street with multiple open wounds with maggots. The patient was refusing transfer to a rehabilitation facility for further care, but only repeated “I don’t need it” when asked why. Psychiatry was consulted to evaluate whether decisional capacity was impaired by an underlying psychiatric disorder. Though the primary team reported that the patient lacked any psychiatric symptoms during this hospitalization, he was “odd” and his mother reported a vague history of “unspecified psychosis.” Upon evaluation, the patient indeed exhibited no positive symptoms. However, he displayed significant negative symptoms including affective blunting, ambivalence, apathy, amotivation, and reduced social drive, which together with collateral from his mother were consistent with schizophrenia. The extent of negative symptoms were, in fact, judged to be impeding his decision-making ability.

Conclusion/Implications: Despite their impact on function, quality of life, and utilization of healthcare resources, the negative symptoms of schizophrenia are commonly overlooked or underappreciated. This may be especially true with patients evaluated by physicians not specialized in psychiatry. Knowing how to obtain information regarding negative symptoms from the primary team can help ensure such symptoms are not missed so that the best consult outcome is reached.