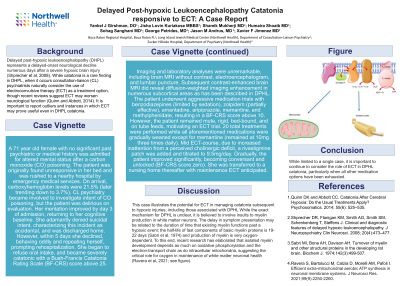 Background: Delayed post-hypoxic leukoencephalopathy (DHPL) represents a delayed-onset neurological decline numerous days after a severe hypoxic brain injury (Shprecher et al, 2008). While catatonia is a rare finding in DHPL, when it occurs consultation-liaison (CL) psychiatrists naturally consider the use of electroconvulsive therapy (ECT) as a treatment option, though recent reviews suggest ECT may worsen neurological function (Quinn and Abbott, 2014). It is important to report outliers and instances in which ECT may prove useful even in DHPL catatonia.

Case: A 71 year old female with no significant past psychiatric or medical history was admitted for altered mental status after a carbon monoxide (CO) poisoning. The patient was originally found unresponsive in her bed and was rushed to a nearby hospital by emergency medical services. On arrival, carboxyhemoglobin levels were 21.5% (later trending down to 3.7%). CL psychiatry became involved to investigate intent of CO poisoning, but the patient was delirious on evaluation. Her mentation improved by day 3 of admission, returning to her cognitive baseline. She adamantly denied suicidal intent, characterizing this incident as accidental, and was discharged home. However, within 5 days she declined, behaving oddly and repeating herself, prompting rehospitalization. She began to refuse oral intake, and became severely catatonic with a Bush-Francis Catatonia Rating Scale (BF-CRS) score above 25. Imaging and laboratory analyses were unremarkable, including brain MRI without contrast, electroencephalogram, and lumbar puncture. Subsequent contrast-enhanced brain MRI did reveal diffusion-weighted imaging enhancement in numerous subcortical areas as has been described in DPHL. The patient underwent aggressive medication trials with benzodiazepines (limited by sedation), zolpidem (partially effective), amantadine, aripiprazole, memantine, and methylphenidate, resulting in a BF-CRS score above 10. However, the patient remained mute, rigid, bed-bound, and on tube feeds, motivating an ECT trial. 20 total treatments were performed while all aforementioned medications were gradually weaned except for memantine (remained at 10mg three times daily). Mid ECT-course, due to increased inattention from a perceived cholinergic deficit, a rivastigmine patch was added and titrated to 9.5mg/day. Gradually, the patient improved significantly, becoming conversant and unlocked (BF-CRS score zero). She was transferred to a nursing home thereafter with maintenance ECT anticipated.

Discussion: This case illustrates the potential for ECT in managing catatonia subsequent to hypoxic injuries, including those associated with DPHL.

Conclusions/Implications: While limited to a single case, it is important to continue to consider the role of ECT in DPHL catatonia, particularly when all other medication options have been exhausted.