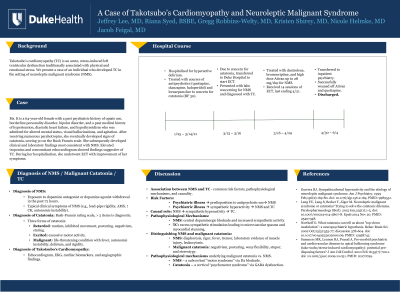 Takotsubo’s cardiomyopathy (TC) is an acute, stress-induced left ventricular dysfunction that is traditionally associated with physical and emotional stress. We present a case of an individual who developed TC in the setting of neuroleptic malignant syndrome (NMS). Given the significant morbidity and mortality associated with both conditions (Medina de Chazal, 2018; Shalev, 1989), it is essential for clinicians to be aware of such an association.

Ms. K is a 64-year-old female with a past psychiatric history of opiate use, borderline personality, and bipolar disorder, a past medical history of hypertension, diastolic heart failure, and hypothyroidism who was admitted for altered mental status, visual hallucinations, and agitation for which she received numerous psychotropics and eventually developed signs of catatonia, scoring a 30 on the Bush Francis scale (Bush, 1996). She subsequently developed clinical and laboratory findings consistent with NMS. Elevated troponins and concomitant echocardiogram showed findings suggestive of TC. During her hospitalization, she underwent ECT with improvement in her symptoms.

The association between TC and NMS is rare; only two other cases have been reported (Ullah, Waqas et al., 2020; Oomura, 2004). This case also highlights the diagnostic and therapeutic similarities between NMS and malignant catatonia. Both TC and NMS have been found to have higher prevalence in populations with psychiatric disorders, which may be explained by increased usage of psychotropics in NMS, and increased sympathetic sensitivity in psychiatric patients with TC (Medina de Chazal, 2018). The proposed mechanisms underlying NMS include central dopaminergic blockade and increased sympathetic activity leading to dysautonomia. Similarly, TC may be due to excess sympathetic stimulation leading to microvascular spasms and myocardial stunning.

CL psychiatrists should be aware of the similarities in risk factors and pathogenesis between TC and NMS to prevent morbidity and mortality. Further research can elucidate the specific mechanisms for sympathetic sensitivity among psychiatric patients and to risk stratify patients who are more likely to develop NMS with psychotropic drug use.