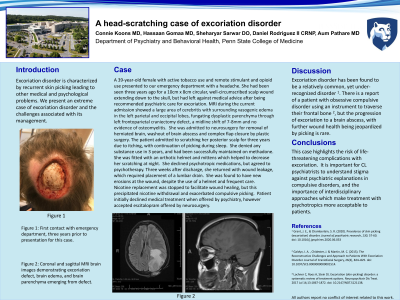 Objective: Excoriation disorder is characterized by recurrent skin picking leading to other medical and psychological problems. We present an extreme case of excoriation disorder and the challenges associated with its management.

Case: A 39-year-old female with active tobacco use and remote stimulant and opioid use presented to our emergency department with a headache. She had been seen three years ago for a 10cm x 8cm circular, well-circumscribed scalp wound extending down to the skull, but had left against medical advice after being recommended psychiatric care for excoriation. MRI during current admission showed a large area of cerebritis with surrounding vasogenic edema in the left parietal and occipital lobes, fungating dysplastic parenchyma through left frontoparietal craniectomy defect, a midline shift of 7-8mm and no evidence of osteomyelitis. She was admitted to neurosurgery for removal of herniated brain, washout of brain abscess and complex flap closure by plastic surgery. The patient admitted to scratching her posterior scalp for three years due to itching, with continuation of picking during sleep. She denied any substance use in 3 years, and had been successfully maintained on methadone. She was fitted with an orthotic helmet and mittens which helped to decrease her scratching at night. She declined psychotropic medications, but agreed to psychotherapy. Three weeks after discharge, she returned with wound leakage, which required placement of a lumbar drain. She was found to have new erosions at the wound, despite the use of a helmet and frequent care. Nicotine replacement was stopped to facilitate wound healing, but this precipitated nicotine withdrawal and exacerbated compulsive picking. Patient initially declined medical treatment when offered by psychiatry, however accepted escitalopram offered by neurosurgery.

Discussion: Excoriation disorder has been found to be a relatively common, yet under-recognized disorder 1. There is a report of a patient with obsessive compulsive disorder using an instrument to traverse their frontal bone 2, but the progression of excoriation to a brain abscess, with further wound health being jeopardized by picking is rare.

Conclusion: This case highlights the risk of life-threatening complications with excoriation. It is important for CL psychiatrists to understand stigma against psychiatric explanations in compulsive disorders, and the importance of interdisciplinary approaches which make treatment with psychotropics more acceptable to patients.