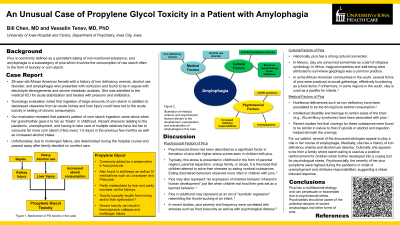 Pica is commonly defined as a persistent eating of non-nutritional substance, and amylophagia is a subcategory of pica which involves the consumption of raw starch often in the form of laundry or corn starch. We illustrate a case in which a patient with long history of amylophagia since childhood who presented in a critically ill state with substantial electrolyte derangements, acid-base imbalance, and organ dysfunction.

Ms X is a 29-year-old African American female with a history of iron deficiency anemia, alcohol use disorder, and amylophagia who presented with confusion and found to be in sepsis with electrolyte derangements and severe metabolic acidosis. She was admitted to the medical ICU for acute stabilization and treated with pressors and antibiotics. Toxicology evaluation noted that ingestion of large amounts of corn starch in addition to decreased clearance from an acute kidney and liver injury could have led to the acute toxicity in setting of chronic consumption. Our evaluation revealed that patient’s pattern of corn starch ingestion came about when her grandmother gave it to her as “treats” in childhood. Recent stressors relating to the pandemic, unemployment, and having to take care of multiple relatives have led her to consume far more corn starch (16oz every 1-2 days) in the previous few months as well as increased alcohol intake. Unfortunately, due to multiorgan failure, she deteriorated during the hospital course and passed away after family decided on comfort care.

This case highlights an unusual and lethal overdose of propylene glycol due to buildup from chronic amylophagia in combination with comorbid acute organ injuries. This is to our knowledge the first propylene glycol toxicity due to high volume corn starch ingestion. Our patient has multiple risk factors for pica including iron deficiency anemia (Borgna-Pignatti 2016). Recent increased psychosocial stress is also highly associated with increased intake of non-food items resulting in the cravings and maladaptive coping as described by our patient (Singhi 1981). There are also cultural factors involved in the development of pica which appeared to have precipitated these behaviors.

Pica has a multifactorial etiology and can perpetuate or exacerbate due to psychosocial stress. Psychiatrists should be aware of the potential dangers of severe amylophagia and other forms of pica.