(PO-080) Anti-Hu Encephalitis and Psychosis: A Case Series with Review of Literature 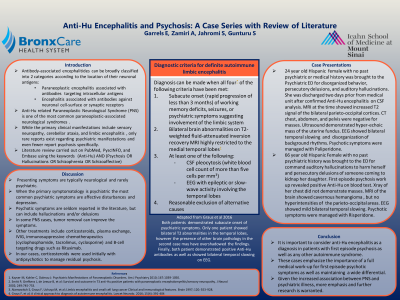 Background
Anti-Hu related Paraneoplastic Neurological Syndrome (PNS) is one of the most common paraneoplastic-associated neurological syndromes (Kayser 2010). While the primary clinical manifestations include sensory neuropathy, cerebellar ataxia, and limbic encephalitis (Smitt 2002), only rare reports exist regarding psychiatric manifestations. Affective symptoms and depression are the most common psychiatric symptoms reported in anti-Hu encephalitis (Kayser 2010, Alamowitch 1997). However, the prevalence of psychotic symptoms is poorly defined. Our poster presents two cases of Anti-Hu Encephalitis manifesting as psychosis as well as a systematic literature review on the co-occurrence of psychosis and PNS.

Methods
Two cases of anti-Hu encephalitis primarily presenting with psychiatric symptoms are discussed. A systematic literature review will be carried out based on the Preferred Reporting Items for Systematic Reviews and Meta-Analyses (PRISMA) model on three electronic databases: PubMed, Embase, and PsycINFO. Search terms included were (Anti-Hu) AND (Psychosis OR Hallucinations OR Schizophrenia OR Schizoaffective).

Results
Our case series reports on two patients with diagnosed anti-Hu encephalitis who were treated by the Consultation-Liaison team, as well as the Adult Inpatient team, where the primary manifestations of the illness were psychiatric in nature. Both patients were female and neither had a prior psychiatric history. Both patients endorsed auditory hallucinations, while one was also noted to have visual hallucinations and paranoid delusions. In each case, the Neurology team was consulted, recommending MRI, Lumbar puncture, and antibody testing for anti-NMDA and anti-Hu antibodies. Both patients tested positive for Anti-Hu antibodies in the context of otherwise normal lumbar punctures and no evidence of anti-NMDA antibodies. Electroencephalograms were performed which demonstrated bilateral slowing in both cases. Magnetic Resonance Imaging (MRI) of the brain was performed in both cases as well and only one showed signal changes in the temporal lobes. Psychotic symptoms in these cases were managed with Risperidone, Olanzapine, and Paliperidone.
Preliminary data gathered on literature review revealed 47 hits on PubMed, 3 hits on PsycINFO, and 37 hits on Embase. We reviewed the articles using our established inclusion criteria and then used the selected articles for discussion.

Discussion
This case series and literature review demonstrate the importance of considering anti-Hu encephalitis as a diagnosis in patients with first episode psychosis. It is noted that presenting symptoms are typically neurological and rarely psychiatric. When the primary symptomatology is psychiatric the most common psychiatric symptoms are affective disturbances and depression (Kayser 2010, Alamowitch 1997). Psychotic symptoms are seldom reported in the literature and cases like the ones presented here emphasize the importance of a full medical work-up for first episode psychotic symptoms as well as a wide differential. Given the increased association between PNS and psychiatric illness, more emphasis and further research is warranted.