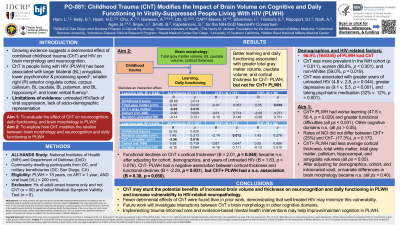 Background: People with HIV (PWH) report a history of childhood trauma (ChT) at up to two-folds higher rates than the general population (Wilson, 2008). ChT can negatively impact brain development, resulting in worse health outcomes (Spies, 2016). We investigated whether brain volume affected the impact of ChT on cognition and daily functioning among virally-suppressed PLWH.

Methods: 245 PWH (Mage= 48.7 years) were recruited from an ongoing, longitudinal study. PWH all received antiretroviral therapy and have a viral load < 200 c/mL for ≥ 1 year. PWH were categorized as ChT+ if they reported a history of physical or sexual abuse in childhood or witnessed violence while growing up. Participants completed a 7-domain neuropsychological battery and three measures of daily functioning (one performance-based, two self-report). PWH were excluded if they reported interpersonal trauma in adulthood but not in childhood or if they failed performance validity testing. Volume and cortical thickness were extracted using FreeSurfer to analyze MRI brain scans. Cross-sectional analyses were conducted using Mann-Whitney U and chi-square tests, and multiple linear regressions adjusted for relevant covariates.

Discussion: Unlike ChT- PWH, ChT+ PWH do not appear to benefit in learning and daily functioning with greater gray matter, caudate volume, and cortical thickness. While detrimental effects of ChT on neurocognition and brain structures have been reported, this study is the first to examine the moderating role of brain volume and thickness among virally-suppressed men and women with HIV.

Conclusion: ChT is highly prevalent among PWH and intrinsically integrated in the neurobiology and clinical presentation of NeuroHIV. Better understanding of this role may advance efforts to optimize neurocognition and daily functioning of PWH.