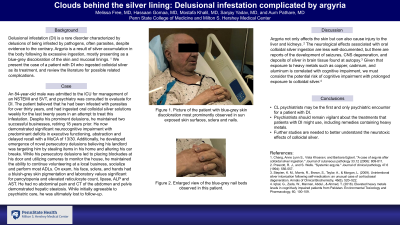 Background: Delusional infestation (DI) is a rare disorder characterized by delusions of being infested by pathogens, often parasites, despite evidence to the contrary. It is rare for patients with DI to be initially seen by psychiatrists, and they are more commonly encountered after they consult other specialties, or develop complications (Trenton, 2017). Argyria is a result of silver accumulation in the body following its excessive ingestion, mostly presenting as a blue-grey discoloration of the skin and mucosal linings. We present the case of a patient with DI who ingested colloidal silver as treatment, and review the literature for possible complications related to it.

Case: An 84-year-old male was admitted for management of an NSTEMI, when psychiatry was consulted to evaluate for DI. The patient believed that he had been infested with parasites for over thirty years, and had ingested oral colloidal silver solutions weekly for the last twenty years in an attempt to treat this infestation. He demonstrated significant neurocognitive impairment, with a MoCA of 13/30 in addition to emergence of novel persecutory delusions. His face, sclera, and hands had a bluish-gray skin pigmentation, and his CBC was significant for pancytopenia with elevated reticulocyte count.

Discussion: Argyria not only affects the skin but can also cause injury to the liver and kidneys. The neurological effects associated with oral colloidal silver ingestion are less well-documented, but there are reports of the development of seizures, CNS degeneration, and deposits of silver in brain tissue found at autopsy (Stepien, 2009). Given that exposure to heavy metals such as copper, cadmium, and aluminum is correlated with cognitive impairment, we must consider the potential risk of cognitive impairment with prolonged exposure to colloidal silver (Iqbal, 2018).

Conclusions: CL psychiatrists may be the first and only psychiatric encounter for a patient with DI. Psychiatrists should remain vigilant about the treatments that patients with DI might use, including remedies containing heavy metals. Further studies are needed to better understand the neurotoxic effects of colloidal silver.