(PO-088) Comorbid SARS-CoV2 and Cotard Syndrome: Is there an association? 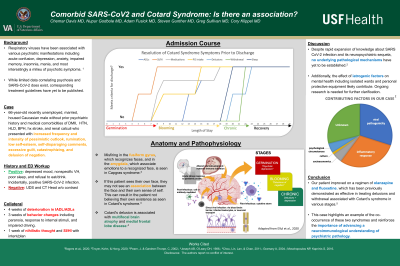 Background: SARS-CoV-2 and other respiratory viruses including MERS and SARS have been associated with various psychiatric manifestations including acute confusion, depression, anxiety, impaired memory, insomnia, mania, and most interestingly a milieu of psychotic symptoms (Rogers et al., 2020; Troyer, Kohn, & Hong, 2020). While this relatively limited data correlating psychosis and SARS-CoV-2 does exist, corresponding treatment guidelines have yet to be published. We present a case of a SARS-CoV-2 infection associated with psychotic depression notable for a delusional belief that the individual is dead, does not exist, and has lost his internal organs.

Admission course was notable for increasing withdrawal; worsening of nihilistic delusions with a persistent belief he was “already dead [and] without any organs”; persistent fear that defecation would lead to widespread contamination of hospital facility; harm to family and loved ones; and flagrant disregard for self-hygiene. The patient was initiated on olanzapine and fluoxetine alongside psychotherapy, with subsequent improvement in mood, ADLs, insight, and judgment after approximately one month of treatment.

Discussion: The global pandemic has fostered rapid expansion of knowledge surrounding SARS CoV-2 infection and its neuropsychiatric sequela, although no underlying pathological mechanisms have yet to be established. Current literature remains conceptual and limited. In assessing the true role of SARS-Cov-2 in neuropsychiatric sequala, there is a need to separate coincidental association from relevant and well-established causes. The following factors must be thoroughly examined: viral pathogenicity, inflammatory response, socioeconomics, culture, and psychological circumstances. Additionally, the effect of iatrogenic factors on mental health including isolated wards and personal protective equipment likely contribute. Ongoing research is needed for further clarification.

Conclusion: Our patient improved on a regimen of olanzapine and fluoxetine, which has been previously demonstrated as effective in treating delusions and withdrawal associated with Cotard’s syndrome in various stages (Chou, Lin, Lan, & Chan, 2011; Gramary A, 2004). This case

highlights an example of the co-occurrence of these two syndromes and reinforces the importance of advancing a neuroimmunological understanding of psychiatric pathology.