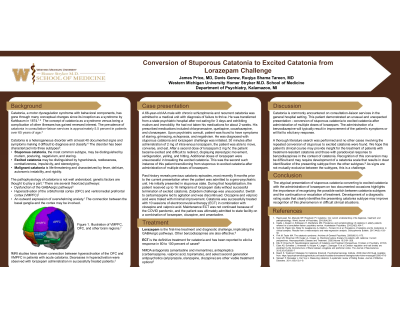 Background: Catatonia has gone through many conceptual changes since its inception as a syndrome by Kahlbaum and Hecker in 1874. Over 40 signs and symptoms are attributed to catatonia, making it a heterogenous disorder that is difficult to diagnose and appropriately treat. Catatonia is mostly encountered as stuporous type but may present in excited or malignant type. The prevalence of catatonia is estimated to be 9 percent among all settings. Contrary to common belief, rates are higher in non-psychiatric inpatient and outpatient settings (15.8 percent) than psychiatric settings and higher in presence of medical or neurological illness with no comorbid psychiatric condition (20.6 percent) (Solmi, 2018).

Case: A 66-year-old male with history of schizophrenia was admitted to a medical unit from a state psychiatric facility after three days of no oral intake including not taking prescribed chlorpromazine, quetiapine, oxcarbazepine, and clonazepam. The diagnosis of stuporous catatonia was made with symptoms including staring, grimacing, echopraxia, and negativism. 30 minutes after administration of two milligrams of intravenous lorazepam, the patient was able to eat and converse. After second dose of lorazepam, the patient became excited, displaying stereotypy, verbigeration, and directionless agitation. Additional doses of lorazepam were unsuccessful in breaking the excited catatonia. This was the second instance of this patient transitioning from stuporous to excited catatonia after administration of lorazepam, the first being in a geriatric psychiatric setting one year prior. During that hospitalization, the patient received up to 16 milligrams of lorazepam daily without successful termination of catatonia. Carbamazepine led to agitation. Clozapine and valproic acid produced no improvement. Catatonia was successfully treated with 10 sessions of electroconvulsive therapy (ECT) in combination with the clozapine and valproic acid. Maintenance ECT was not continued because of the COVID pandemic. The patient was readmitted to the psychiatric unit within a month then transferred to state psychiatric facility.

Discussion: Catatonia is often encountered on psychiatric consultation services in general hospital settings. This was an unusual conversion of stuporous catatonia to excited catatonia with administration of low dose of benzodiazepine. Catatonia involves hyperactivation (increased blood flow) of orbitofrontal cortex (OFC) and ventromedial prefrontal cortex (VMPFC). GABA, NMDA, and dopamine have all been implicated. GABA-A agonism by benzodiazepines improve catatonia by normalizing orbitofrontal cortex activity (Ellul, 2015). No reported cases of stuporous catatonia transitioning to excited catatonia were found on a thorough review of literature. This patient’s clinical course may provide insight into the pharmacological treatment of treatment-resistant catatonia and those with paradoxical response of catatonia to benzodiazepines.

Solmi M, et al. Prevalence of Catatonia and Its Moderators in Clinical Samples: Results from a Meta-analysis and Meta-regression Analysis. Schizophr Bull. 2018;44(5):1133-1150.